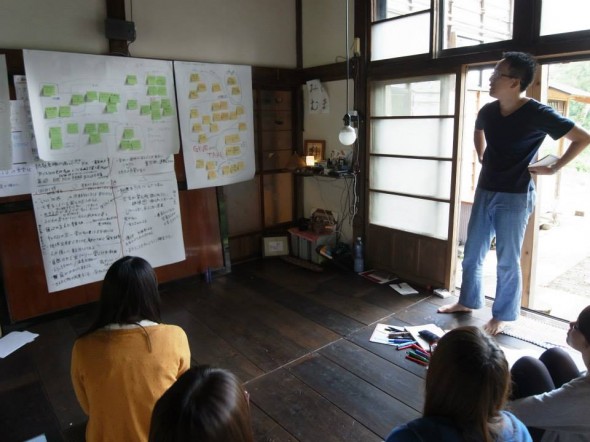 We recently caught up with former student Yuya Fukada, a graduate of our 2011-12 class, who has since been overseeing a Syrian refugees project with the Japan International Cooperation Agency and also working on personal projects in Nepal.

Yuya at his JICA office in Japan

What did you do after graduating from the program?
I started working with Japan International Cooperation Agency which is a governmental bilateral cooperation organization.

Where are you working on now?
As an official of JICA, I am now working in Turkey and in charge of formulating a project for  the Syrian influx in Turkey.
It’s a budget of about €300 million for infrastructure improvement for municipalities in 10 provinces which host a total of 1 million Syrians, and for several other projects in Albania Macedonia. Before this, I dealt with several airport, road and bridge construction projects in several countries.

Can you describe a normal work day?
I spend about three weeks out of the month in my office in Japan and the remaining week in Turkey and Macedonia (a 12 hour-flight from Japan to Istanbul and one another hour from Istanbul to Ankara and Skopje!).

When I’m in Japan, normally I work from 9:30 and up to about 20:00. I start with e-mail, then have meetings with officials from relevant ministries such as the Ministry of Foreign Affairs and Ministry of Finance, since we have to follow official procedures both for grant and loan projects as Japanese official development assistance. I’m in regular contact with our colleagues in the regional offices of JICA after 16:00.

What has been your experience working in development so far?
Other than my work with JICA,  I also collaborate on a small construction project in Nepal to build a health center in rural area. I work with a Japanese and Nepali architects and their students. (See here and here.) In addition, I organized small group to tackle village development in rural areas in Japan with university students.

Yuya leading a workshop and commenting on students’ works at rural area of Japan. which aims to promote small village.

Can you tell us a bit more about the Syrian refugees project?

Well, there is the issue that Japan cannot directly assist refugees according to our regulation. So we took a different approach in order to assist them as well as Turkish citizens.

Currently, there are nearly 1.7 million Syrians in Turkey. The Turkish government refers to them as Syrians under temporary protection of Turkey, which is quite sensitive a issue. Around 230 ,000 of them live in 23 refugee camps, or accommodation centers, as they call them. However, the remaining 1.5 million are living in various cities which puts a huge demands on infrastructures such as drinking water, sewage and solid waste management.

Our project is to finance loans to the municipalities who are affected by those Syrians to construct plants, water networks and waste disposal sites and relevant equipment. I am in charge of formulating the project.

How did you become involved with the Nepal project?

I met one Japanese architect during my stay in Barcelona who was researching the Catalan vault for one year. Both of us were interested in using that brickwork technology in rural areas of developing countries, so we contacted his Nepali colleague who is now an architecture professor at the university there. The three of us surveyed and found a village where people were eager to construct new health posts, and now we are designing a building with them and preparing to apply  for Japan’s grant assistance.

Last year we led a workshop with Nepali architecture students last year and built a small structure with local bricks adopting the Catalan vault technique. We are planning another workshop in the coming months.

Workshop at a collage in Nepal with its Nepali students to construct a vault with locally made burnt tiles.

What do you like the most and the least of working in development?

There is no least. I have always enjoyed working with local people who believe in the possibility of creating something new. Their life, culture, knowledge…everything is interesting to me.

Your work with JICA was a continuation of your internship with the agency during our master’s program. Do you find that it is easy to find work in this field?

Good question. To get a job at JICA is quite tough. Every year they hire only 30 people out of some thousands of candidates…

In general as an architect it is easy to find a project but not easy to continue your career in this field. You must find ways to generate income and if you work in developing countries, you have to keep up with the latest construction methods.  . I never say you should give up though. It’s fun.

Is your work, and generally speaking, development jobs out of graduate school well paid?

Well, as JICA is the only official agency of Japan, we are paid a bit better than other public workers. During our work in developing countries, we are given additional salary. I have some experience in NGOs but it is very different in terms of financial stability.

For students looking to study for this line of work, do you have any practical advice?

It is absolutely key to have some experience working in developing countries. Theory and lectures are not enough.

Do you feel like you are making a positive impact with your work?

Yes I do. But working at a big agency means you are always conditioned and subject to protocol; personal opinions are often ignored. That is why I like to take on personal projects that I can control myself.

Do you keep in touch with any of your classmates from the program?