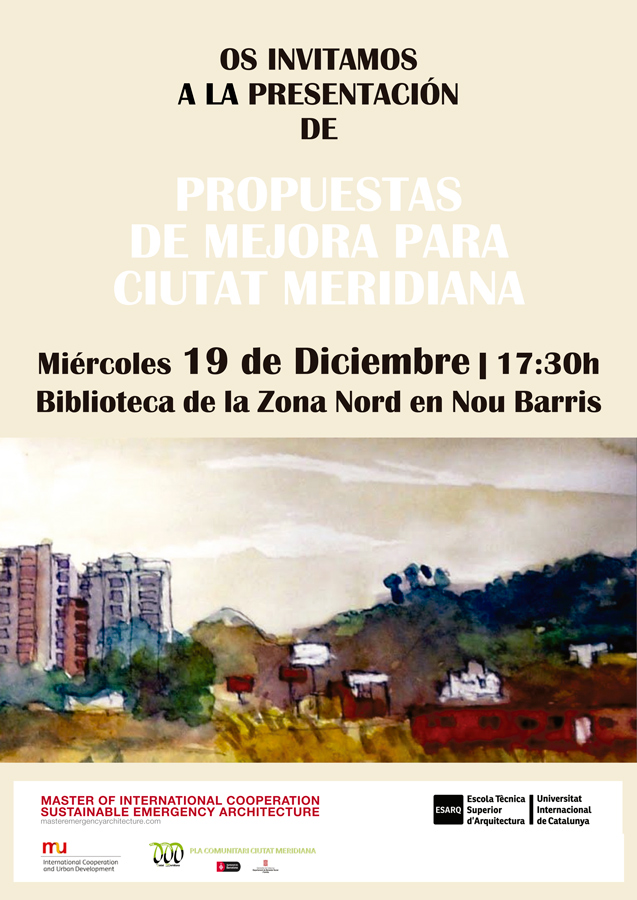 Next Wednesday December 19th in Nou Barris, Barcelona, our students will officially present a series of tools and urban intervention proposals for Ciutat Meridiana, a peripheral neighborhood in Barcelona that ranks highest eviction rate in Spain.

The initiative, carried out with the support of the Barcelona Town Hall and the local municipality of Nou Barris, forms part of the masters workshop that focuses on “recycling” the existing urban and architectural barriers produced by the neighborhood’s steep topography and addressing the social challenges brought on by an increasing immigrant population.

Ciutat Meridiana’s alarmingly high eviction rate has earned it the unfortunate moniker “Eviction City”, being home to daily eviction victims–many of them immigrant minorities from Latin America and Africa–of the predatory lending that characterized the real estate boom. In addition to the consequential socio-economic strife and racial tensions, the neighborhood suffers from a chronic lack of connectivity to Barcelona and within Ciutat Meridiana itself, inherited by the speculative urban planning from which it was born during the Franco regime in the late sixties. Void of civic axes, public spaces or an integration with the surrounding Collserola mountain, the neighborhood lacks basic infrastructure such as elevators in residential buildings–making it impossible for elderly  to leave their apartments–or transport systems to facilitate mobility across the steep terrain.

During the last two months, our students have been researching the neighborhood’s historical context and specific urban conditions. Using a bottom-up approach, students engaged the community through a particpation session on December 1st, in which they collected vital data about the neighborhood’s urban conditions and called upon residents to share their experiences, concerns and most pressing needs.

With the information collected, our students have developed  a series of tools and intervention proposals that will aid the residents and elected officials in improving their own neighborhood. These include a guide map of cultural routes of the neighborhood, a manual for citizen participation for the physical improvement of the neighborhood, an online crowdmap of vacant apartments and opportunities for public spaces, a diagnostic and proposal for enhanced mobility and a proposal for a civic axis connecting the different areas of the neighborhood, all of which will be officially presented next Wednesday, December 19th.