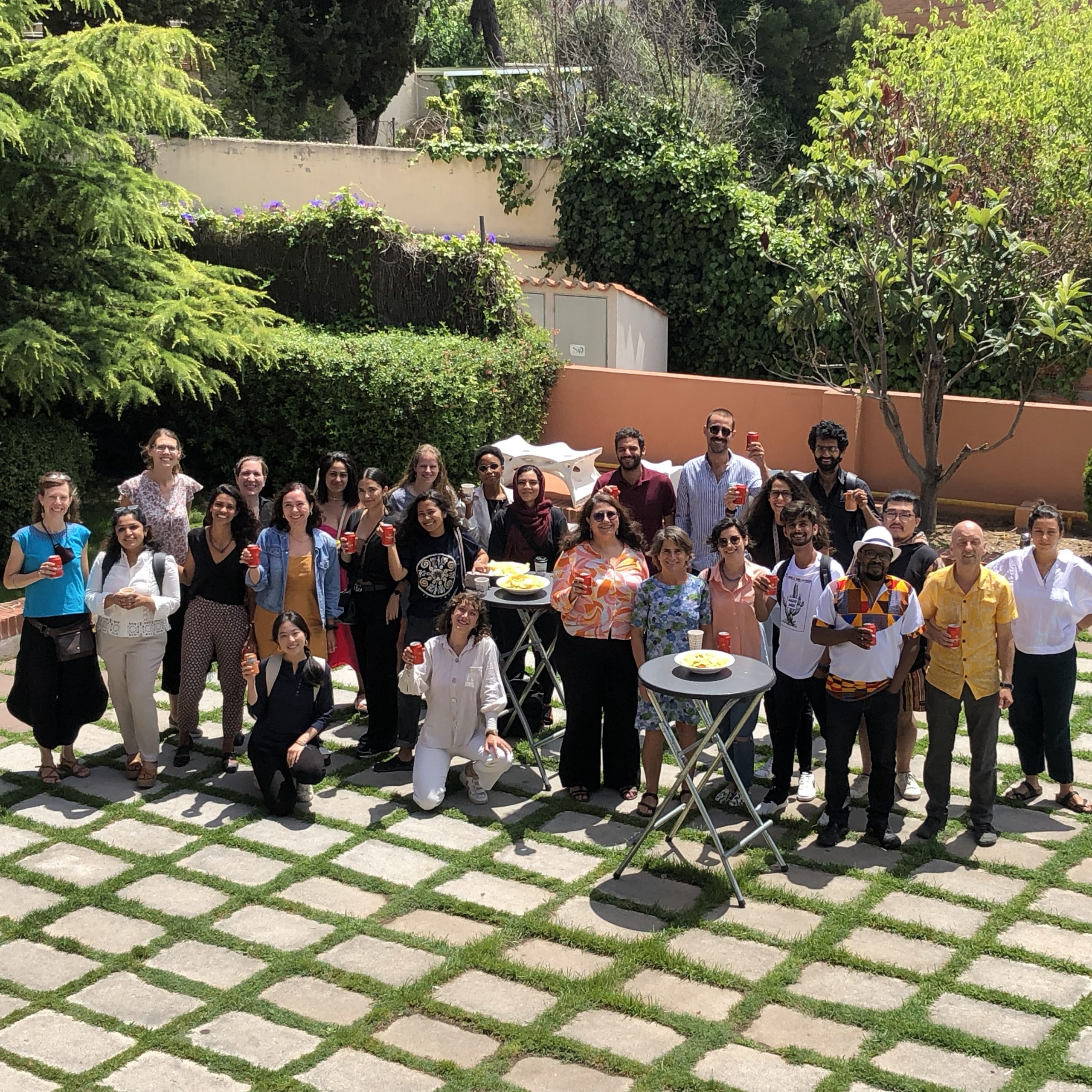 By adminJune 15, 2022Blog, Uncategorized
No Comments

Last Friday, our students had their final thesis presentations with an exceptional guest  juror; Professor Florian Urban from the Glasgow School of Arts, Mackintosh School of Architecture, along withUIC professors Apen Ruiz, Carmen Mendoza Arroyo, Melissa García Lamarca, Hug March, Kathrin Golda-Pongratz, Mbongeni Ngulube, Nerea Amorós Elorduy and Pere Vall. The topics chosen by our students  this year are very diverse and  include: gender equality, socio-spatial resilience, displaced populations and others. They approach these contemporary issues from an actualized perspective, contributing to responsive and protracted thinking, offering extensive analysis of contemporary case studies. This approach is in line with the Master’s program, as we discuss them throughout the year, and acknowledge they are in constant evolution and change. Our objective is to teach students to analyze each topic carefully and to commit to  real scenarios, providing them with current publications, as well as the real experiences of their supervisors and academics ia throughout the research process. Topics related to emergency or challenging societal changes are to be addressed proactively, suggesting solutions while carefully informing their practice through specific research methods.

On emergency response and post-disaster risk reduction, Krishnanunni Jithendra Kumar, studies the importance of ecosystem management based disaster reduction strategies (Eco-DRR)  to break the vicious cycle of ecosystem degradation, and climate change and increased disaster risks through the case of the Western Ghats Mountain range in Kerala, India. And Jocelyn Keller’ thesis: “Community-Based Disaster Risk Reduction: A Focus On Wildfires” asks the question Can community-based DRR aid in the overall destruction caused by wildfires to save lives and homes? While Andrija Terzic researches the case of Budva, and how Budva’s rapid development model (RDM) impacts city resilience, specifically in the context of earthquakes. On disaster and first AID responses, Wei Lin investigates the rescue, relief, and reconstruction works of the flood event in Shanxi, China, in October 2021, connecting the issues of poverty alleviation, disaster risk reduction, and civil engagement in this case. Last, from a future-thinking approach, Aline Van Driessche poses the question of using AI for infrastructural post-earthquake damage assessment: identifying advantages and bottlenecks holding back the transfer from academic research to operational methods.

In regards to gender, this year, several students focused on inclusion and gender issues. Yohana Alves Soares explores home-based economic activities (HBEs) and their effects on women’s livelihood from a spatial perspective. As the majority of people running HBEs are women, the absence of studies on this subject from a gender perspective is inexplicable. Nedjine Dorcely develops a critical examination of Barcelona’s city council reports, NGOs, and sex work organizations, to create an analytical understanding of how urban design and policymaking moved the position of sex workers in the urban environment. And Ninon Esclangon analyzes how homeless women interact with the urban sphere, what their space in the city is, and their possibility of appropriation. Victoria Vandewalle asks how to include the voices and experiences of LGBTQIA+ communities in post-disaster scenarios. A theoretical framework is presented where a critical overview of the practices and existing guidelines concerning LGBTQIA+ community and their needs are exposed in the humanitarian field.

On forced displacement and migration, students have approached the topic from different perspectives, such as climate migration or post-conflict scenarios, among others. Adarsh Joshi showcases the consequences of climate change that lead to migration in the region of Sundarbans. This leads to the inference of implementing legal frameworks including the climate-induced migrants and considering human mobility as an adaptive approach towards tackling climate change. Jana Zein studies the case of Lebanon after the war of July 2006. She asks what were the different factors and constraints that led Hezbollah to monopolize the reconstruction of the southern suburbs. This approach considers the political, religious, historical, geopolitical, sociological, and economic aspects that played a role in the response. The main goals of the reconstruction were the dignity of the people and to preserve the ‘collective memory’ and ‘urban fabric’ of the city. Rodis Chamoun researches the crisis in Lebanon from a contemporary perspective. She unfolds an ethnographic and holistic approach to identify the needs and explore bottom-up proposals for “Hay Al-Tanak”, one of the most vulnerable Syrian informal refugee settlements in Beirut city. To reinforce resilience strategies in the Lebanon current crisis, Lucia Abou Jamra proposes strategies for water security. Her thesis documents the unevenness and inequalities of the water access in Beirut and its suburbs and makes sense of them by understanding the alternative water provision practices adopted by citizens in the wealthiest and poorest neighborhoods. Closing the reflections on Lebanon as a case study, Alfred el Kareh investigates the grey zones of CVA (Cash Voucher Assistance) in Lebanon and, more specifically, on vulnerable Syrian refugees’ households residing in non-residential shelters. This is an important topic because of the unpredictability of their situation and the gap in research about the impact and challenges faced by this group.

Other works explore topics like spaces in transition or urban regeneration processes. Lina Baishya’s research aims to study how nation-states use power to spatially control the movement of a particularly marginalized population by restricting them to ‘limbo spaces’, which further exacerbate their social exclusion, specifically in the case of the stateless people in Assam. Elif Ceren Demirkol explores the role of design in the reactivation of borderlands in Cyprus through the case of Varosha. The Turkish army fenced off Varosha, a coastal quarter on the northern side, immediately after the conflict. The vibrant center for tourism, trade, and commerce, once the island’s jewel, has since become a symbol of the conflict. This thesis delves into the case of Varosha as an example of a post-conflict abandoned town, to comprehend Varosha’s potential future scenarios and their implications for peacebuilding. And the very critical approach of Shilpa Menon seeks to unravel the contradictions in this idea of ‘transformation’ accomplished by politically laden art projects in the context of social exclusion and structural inequalities in resettlement housing areas and questions the ways in which the various stakeholders involved in the process, perceive slum transformation and contribute to the contradictions. Concerning the latter, Christine Ying Lu compares the “urban acupuncture” strategy and the practice process between Barcelona and Taipei city to improve the urban public spaces. First, collect and analyze information about two cities and examine the common and differences between the two cases.

Congratulations to all for their amazing research! Now, our students start their internships in many relevant humanitarian organizations, such as UN-Habitat, MSF, and Shelter Center, among others.

Thank you all for such a fantastic academic production, and many thanks to our supervisors and jury for their stunning work!