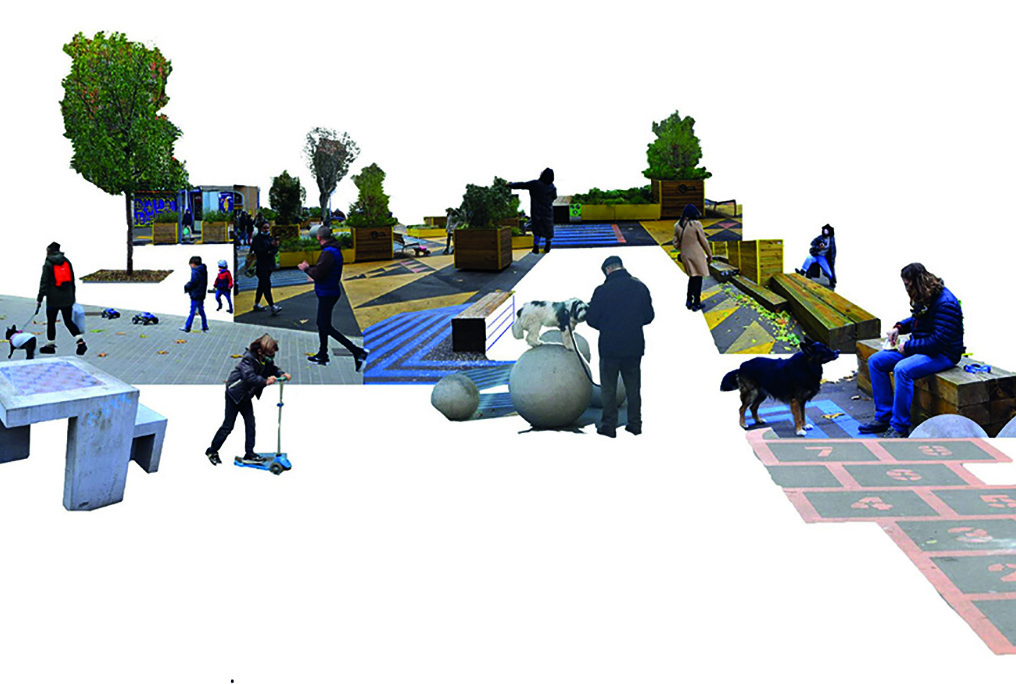 By adminJanuary 13, 2021Blog, Program
No Comments

At the end of last year, our students participated in the socio-spatial workshop Post-Covid Public Space Transformations. The workshop, led by our director Carmen Mendoza-Arroyo, assistant director Raquel Colacios and Apen Ruiz, and in collaboration with Isabelle Anguelovski, Margarita Triguero-Mas, Helen Cole and Amalia Calderón from the Barcelona Laboratory for Urban Environmental Justice and Sustainability, aimed to evaluate specific vulnerabilities faced by women related to public space use and perception as well as the specific vulnerabilities in the (post) Covid-scenario.

Our students looked at three public spaces in Barcelona – Jardins de la Rambla de Sants, the Superblock of Sant Antoni and the Green Axis Cristòbal de Moura in Poblenou – , how they are being used during the COVID-19 pandemic from a gendered perspective and how female and gender non-conforming residents perceive those spaces and are affected by those changes.

Here we present the analysis of these results and the recommendations our students proposed for those spaces.

The urban renewal projects related to the Superblocks have been playing an important role in the community’s livelihoods since before the pandemic, but the impacts of this crisis can be perceived in very different ways depending on socio-economic pre-conditions.

Through surveys and interviews, the students found out that 58% of users considered the space more significant for them after the pandemic. Both genders expressed that the implementation of the Superblock has had a positive impact on their health and well-being. The students observed that many citizens were concerned about the lack of signage and designated bicycle paths, which leads to the open spaces in the Superblock being used simultaneously by pedestrians, cyclists, etc. Many people were bothered by the lack of maintenance and upkeep in the Superblock. They also noted a serious lack of participation in decision making and design. Despite existing mechanisms to facilitate participation, most people werenot aware of them or encountered obstacles such as language barriers.

In their proposal, the students suggested better signage and designated bicycle paths to make the spaces more pedestrian friendly as well as a system for the maintenance and regular monitoring of the Superblock. They recommended for the local neighborhood association and relevant city departments to be joint stakeholders for this system. Furthermore, they proposed to implement a more inclusive and attractive participatory process to further develop the space.

Located in the Sants-Montjuic district of Barcelona and bordering the Sants and Bordeta neighbourhoods, the Jardins de la Rambla de Sants (JRS) is an elevated bridge that measures 20,000 square meters; and which stretches 760 meters in length; and 12 meters above street level at its highest peak.

The students sought framed their research around the equal distribution of health and security benefits to vulnerable groups in the reopening phases of the Covid-19 pandemic, spatial experiences and connection between the neighbourhoods, and specific obstacles for women. Through the collection of quantitative data, observation and anecdotal experience they observed that different demographics will populate the Rambla depending on the time of day. Due to the absence of lighting, less women can be seen at night. Nevertheless, occupants are grateful to have a public place of retreat, free of charge and operating hours. The Rambla is frequently used not just for its east-to-west linearity, but also for its connection between La Bordeta to Sants. Yet, an uneven grade, the concentration of street furniture and location of planting can create a mobility obstacle. Additionally, poor way finding signage and unclear connections between the Rambla and the urban landscape below are problematic.

The students’ proposal included new signage, a dog park and increased green spaces at one end of the Rambla and the creation of multi-purpose areas. Furthermore, they recommend the improvement of the lighting system to provide a more secure space for women at night, the re-opening of the café located on the Rambla and organisation of workshops and open-air cinema post-Covid.

The green axis of Cristòbal de Moura in Poblenou forms part of the 22@, the innovation district of Barcelona. The project aims to connect the Parc Central de Poblenou and the Parc del Besós. Currently, around 200m have been constructed. The site is surrounded by new housing blocks, Ca l’Alier, a construction site, two empty plots and a wall that divides the space.

Gathering the objective data, demographics, interviews and existing documents revealed to the students that the wall not only creates a physical barrier, but separates the new development with hotels and parks from the existing community, made apparent in both physical appearance and demographics. A closer look revealed that women in the area face certain issues, depending on what side of the wall they live, such as access to new housing. Furthermore, the 22@ plan to develop the district has had various adverse effects on the neighbourhood, such as gentrification and speculation, lack of basic infrastructure due to the promotion of office buildings and hotels, and empty lots as the implementation of the plan has been delayed. Yet, access to this particular green axis has been considered a positive effect on health by most users. Women felt safe as social distancing was easy to adhere due to low density. The elderly neighbours of the community also felt very comfortable in the space.

From a gender point of view, a number of specific steps were proposed, such as more ground floor uses, the planting of lower plants to increase visual connectivity, better maintenance of the public space and rerouting of the traffic, more childrens’ facilities and participation of the women’s association to enhance the space. Overall, the students considered that this underdeveloped area of the @22 district has the potential to become a people-centred neighbourhood, hosting schools, medical centres, local shop and affordable housing.