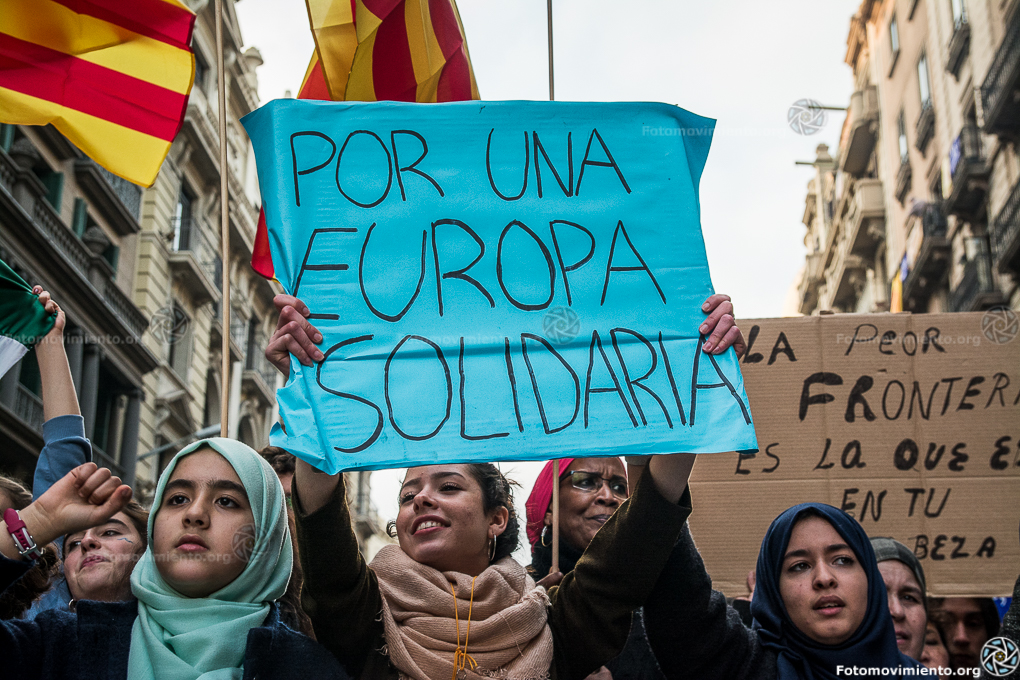 How the multiple crises of this decade shaped our program

By adminDecember 31, 2019Blog
No Comments

Today as we move into a new decade, we reflect on how the global events in the past ten years have shaped our Master program. The essence of our program is to prepare architects to develop and rebuild communities affected by rapid urbanization, poverty, conflict and natural disasters. The multiple crises that have intensified in this outgoing decade – from the migrant crisis, housing crisis and climate crisis, to rising inequality, nationalism and a crisis of democracy – have not only strongly impacted our course, but also show the invaluable importance of increasing awareness in young professionals by working on urgent emergency topics.

THE HOUSING CRISIS
Barcelona, like many other cities worldwide, is facing an acute shortage of affordable housing, social housing and an alarming rate of evictions. “The pressure on Barcelona is increasing and so is the difficulty to access housing,” our professor Kathrin Golda-Pongratz pointed out in a recent interview. “It spiralled completely out of control with the arrival of foreign capital, which is now also appropriating the historic neighbourhoods of the big cities. Investors acquire entire buildings in Ciutat Vella, Gràcia or El Raval, expel the population, and convert them into another type of second residence: for tourists, as luxury residences, or as capital itself, therefore treating housing as a commodity of speculation.”
In 2012, our students took part in a workshop to develop urban intervention proposals for Ciutat Meridiana, a peripheral neighborhood in Barcelona with the highest eviction rate in Spain. Using a bottom-up approach, students engaged the community through a participation session and collected vital data about the neighborhood’s urban conditions and called upon residents to share their experiences, concerns and most pressing needs. As a final outcome, they produced a series of tools including a guide map of cultural routes of the neighborhood, a manual for citizen participation for the physical improvement of the neighborhood, an online crowdmap of vacant apartments and opportunities for public spaces, and a diagnostic and proposal for enhanced mobility.
Housing is a human right, not just a commodity, claimed Leilani Farha, the UN Special Rapporteur on adequate housing, and called housing the 21st century’s biggest battleground.

INFORMAL SETTLEMENTS AND RAPID URBANIZATION
Closely connected to the housing crisis is the phenomenon of rapid urbanization, specifically in developing countries, and the vast development of informal settlements. According to the UN, the absolute number of people living in slums or informal settlements grew to over 1 billion and an estimated 3 billion people will require adequate and affordable housing by 2030. This unquestionable reality calls for flexible, creative and bottom-up interventions from and urban to an architectural perspective.
During our 2016 field trip to India, our students visited informal settlements such as Dharavi in Mumbai to understand the urban issues faced by these megacities. Mass immigration, land rights issues and slum-upgrading challenges were only some of the aspects they researched. Other field trips led us to work in Rio das Pedras, a favela of Rio de Janeiro, to explore how to improve the existing living conditions of vulnerable families through socio-spatial analysis followed by recommendations and upgrading strategies. In 2015, we travelled to the border region of San Diego/Tijuana, the largest bi-national metropolitan area in the world, for a workshop led by our director Carmen Mendoza and with the collaboration of Sergio Palleroni of Portland university, Teddy Cruz and Fonna Forman of the UC San Diego’s BLUM Cross-Border Initiative. Our project site was Los Laureles Canyon, an informal settlement bordering the Tijuana River Watershed whose precarious living conditions have led to chronic problems of cross-border flows of sediment, trash and hazardous waste.
This rapid urbanization threatens the world’s environmental, economic and social stability. One of the most serious problems to solve regarding human settlement will be water and waste management, another subject our master touches on, to solve these infrastructural needs in a sustainable way.

EARTHQUAKE IN ECUADOR (2016)
Emergency Response is one of the central aspects of our program. Human disasters due to military conflicts or natural disasters force communities to transfer their lives and livelihoods to new temporary settlements. Unfortunately, often these become their permanent homes. The work of architects and other professionals planning these human settlements and their infrastructure needs to encompass the urban and architectural process in accordance to rebuilding the social, economic and civic infrastructure of the displaced community.
On April 16th 2016, a magnitude-7.8 earthquake devastated coastal Ecuador, killing over 700 people just one month before being rattled once again by a second magnitude 6.8 quake. Roughly 10,000 buildings and 560 schools were either damaged or destroyed, affecting mostly small communities in fishing villages along the coast, where sixty to seventy percent of houses collapsed. As part of the recovery efforts, our students undertook two consecutive field trips to the coastal town of San José de la Chamanga, where an estimated 60% of homes were damaged. One of the insights the collaboration with the local community brought to light was that the earthquake revealed or exacerbated preexisting social and planning problems, and the lack of basic public services and housing. The focus of the second field trip shifted to tracking the evolution of five previous sites of intervention and assessing the perception of the community and government of the ongoing reconstruction process. To find out more about our work in Ecuador, read our publication Reconstructing Chamanga.

GENDER INEQUALITY
#MeToo has been the symbol of this decade’s struggle to break the silence around sexual violence. In Spain, this year hundreds of thousands of protesters marched for women’s rights on International Women’s Day. Female discrimination and the lasting legacy of patriarchy lies at the heart of the study of gender inequality. Male power and privilege are also inscribed into the ways in which cities are built. Gender hierarchies and stereotypes about gender are set in place in development discourses and practices. A core issue to our program, our workshop Gender, Space and Culture led by professor Apen Ruiz teaches how to use gender as a central category of analysis in regard to the participation in urban contexts and how the so called ‘refugee crisis’ could be understood from a gender perspective.

CLIMATE CRISIS
The decade we finally woke up to climate change – is the title of a recent article by the National Geographic. The past ten years saw hurricanes Sandy, Maria and Harvey pass by and leave a trace of destruction, while it concludes with large parts of Australia on fire as a decade of exceptional global heat and high-impact weather. Environmental justice, climate change adaptation and resilience have increasingly become integral parts of our program.
“We need to understand that the fight against climate change needs to be connected to the fight for social justice,” our guest professor Gonzalo Lizarralde explained during his visit in Barcelona, as “the fight for social justice is tied to the idea of preserving the environment and adapting to climate change”.
Climate change adaptation, community participation and collaborative design will be important aspects of our upcoming field trip in January, when our staff and alumni Rossana Poblet will take our students to Peru. In March 2017 the natural phenomenon known as ‘El Niño costero’ brought intense rains and flooding to Pedregales in Piura, causing 3000 people to lose their homes. Three years later, the population of this area is still waiting for the government of Perú to solve their housing problem. In collaboration with our local partner, the Universidad de Piura, our workshop will contribute to the reconstruction plan of the area with specific strategies for the improvement and design of open spaces and children play areas.

MIGRANT CRISIS
The so-called migrant crisis is possibly one of the largest influences on our current program, and closely linked to all of the above developments. We are currently witnessing the highest levels of displacement on record with 68.5 million forcibly displaced people worldwide, according to the UNHCR. While 85% of the world’s displaced people are in developing countries, governments in the Western world are closing the doors on refugees and migrants. Climate change, military conflicts and economic crises will continue to accelerate the global refugee crisis. As citizens, architects and educators, our team from the Master of International Cooperation Sustainable Emergency Architecture advocates for the safe entry of refugees fleeing from violence and poverty into our countries and the integration and social inclusion of migrants and refugees. This requires a new paradigm in urban governance and planning, which we have been actively promoting through our research, events, workshops and participation at conferences.
As part of our Master, we undertook two student workshops in collaboration with “Barcelona, Refuge City”, a special program our hometown Barcelona developed to handle the reception, accommodation and care of refugees and asylum seekers. We also went on a field trip for an international workshop in Thessaloniki, Greece. Our students explored sustainable urban strategies to integrate refugees and prevent the conflicts that arise from the perceived notion of refugees as an economic and social burden, working with the main NGOs in this area. “We architects and urban designers have to think about integration strategies and housing policies beyond only improving emergency accommodation, and how to make a real integration possible,” our director Carmen Mendoza Arroyo asserts. “Developing strategies for refugee integration will be on top of the urban agenda in Europe, as 60% of these refugees will come to live in the cities.”

A turbulent decade is coming to an end that has also been filled with memorable moments and events as we celebrate our 10 year anniversary. With more than 200 students now graduated from our program, we are grateful to have built such an amazing community within the humanitarian architecture field and are looking forward to welcoming many new students and collaborators in the new decade. Happy new year!