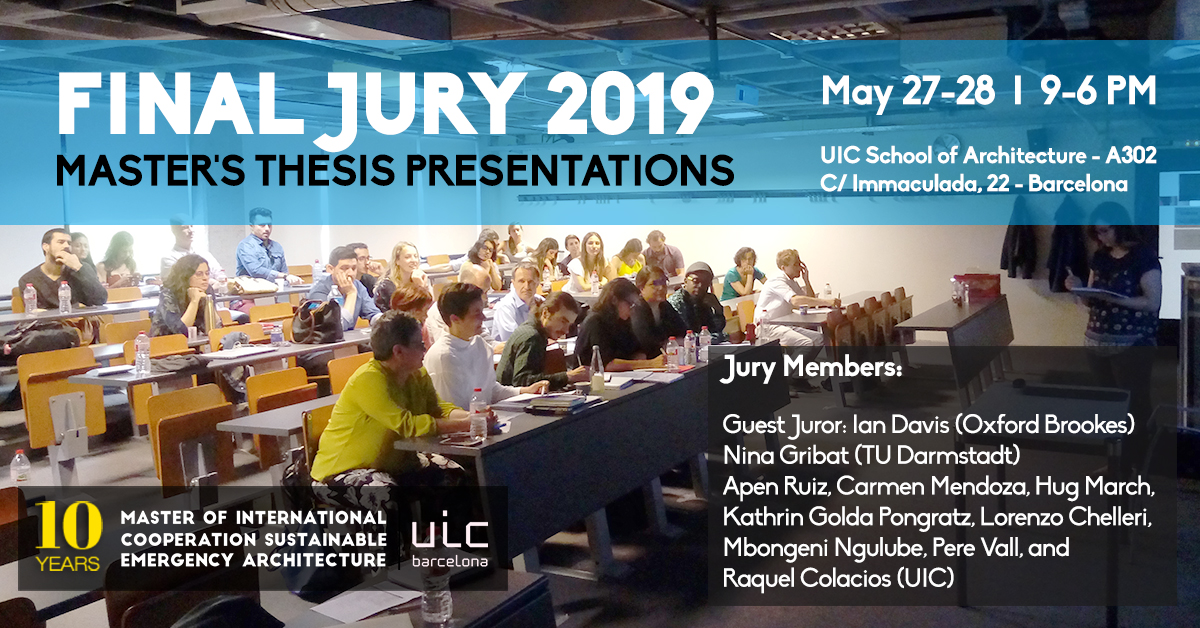 It is that time of the year again! Before we start our big anniversary celebration, this year’s course comes to an end with the presentation of our students’ final theses.

Join us May 27-28th when our students are presenting their final thesis before a jury comprised by our in-house faculty members and visiting jury members Nina Gribat from TU Darmstadt and Ian Davis from Oxford Brookes.

Here are the topics our students have been looking at this year:

In Search of Urban Commons, Collective Action and Urban Policies, a Case Study of Bologna, Italy (by Brooj Al-Ammari)

The Temporal Migrant City: A study on the relationship between sub-Saharan migrants and the city of Algiers, Algeria (by Assia Belguedj)

(CO/IN)HABITING THE CITY CENTRE. The outcomes of a failed gay branding, in the neighbourhood of San Telmo, Ciudad Autónoma de Buenos Aires (by Luca Costantino Arbau)

The Role and Impact of Civil Society Organizations as ‘Migrations Managers’ in the times of Globalization. The case study of CSOs in Barcelona (by Jose Barastegui)

Intercultural Strategies. The role of culture in promoting the inclusion of newcomers. A comparison of formal and informal receptions centers in Marseille (by Andréa Benoist)

Spaces of cultural exchange. Integration of migrant communities in urban life through commoning practices in Athens (by Vasiliki Bourli)

Child Friendly Spaces in the realm of Early Child Development for Refugee and Migrant Children: The case of Ketmet Playground Project in Brussels (by So Han Cheung)

Walls for Change: The Role of Urban Street Art in Spatial and Social Change, Barcelona (by Merve Dadas)

Architectural Education in East Africa: how it affects the design profession’s response to rapid urbanization (by Sarah Elizabeth Dunn)

Fragmentations and the urban imaginary: the shaping and breaking of the physical and social frontiers, the case of El Colli, Zapopan, Mexico (by María Cristina García Escobar)

The influence of the background factors to the children’s level of learning on disaster: the case of Bandung metropolitan area (by Dini Kusumawardhani)

Learning in the Struggle for Housing: Knowledge creation and exchange in Barcelona’s Housing Movements (by Mateus Lira da Matta Machado)

What is the future of a city centre after an earthquake? The rationality behind the spatiality of the reconstruction process of Portoviejo, Ecuador (by Damiana Pacheco)

(Re)humanising Refugee Camps through Ecological interventions: Exploring the need for green initiatives in and around refugee camps in Lesvos (by Sruthi Ravi)

Nuclei of Autonomy: Abandoned buildings designing their future | A case of bottom bottom up processes shifting modes of civic use in Athens (by Marina Skarpeti)

Where are the NGOs? A Case Study of State-led Urban Upgrading Processes in Medellin, Colombia (by Juan Carlos Uribe Vega)

Are we exporting problems or solutions? A model for Transitional Field Hospitals in Natural Disasters (by Matt Wilson)