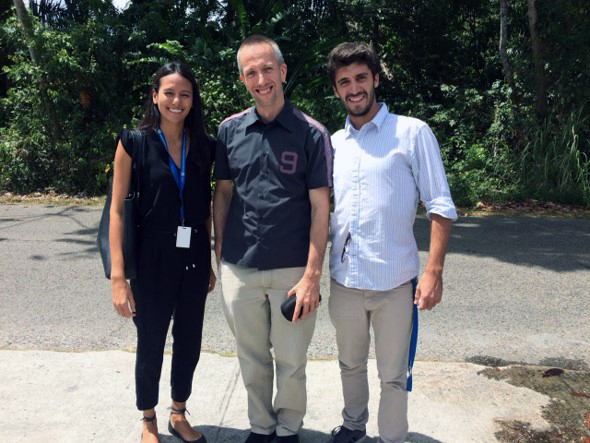 In our latest alumni interview, we catch up with Renata Mendez (1991), who completed our program in 2017 and recently concluded an internship with the United Nations Environment Program from August 2017 to February of this year. An architect native to Honduras, Renata (above, left) tells us about her experience working with Disasters and Conflicts sub-program in Panama during last year’s devastating hurricane season, in particular the importance of considering environmental factors as an integral part of emergency response.

What have you done since graduating from our program?

Right after graduating, I was offered an internship position at UN Environment, under the Disasters and Conflicts sub-program in Panama City. As for now, I have recently just returned to Honduras, deciding where to go next!

Your internship took place during last year’s hurricane season which devastated much of the Caribbean.

Working in the emergency response for the 2017 Hurricane Season was a real challenge and an amazing learning experience. Three weeks into the internship and we had two category 5 hurricanes in the Caribbean, a real “baptism of fire”! It was a unique opportunity to see first-hand how the humanitarian sector copes with emergencies, learning how the decisions were being made, how the clusters work, the organizations involved, keeping up with updates, and communicating with aid workers deployed throughout the Caribbean. Part of the Disasters and Conflicts response was creating FEAT (Flash Environmental Assessment Tools) tables for the islands, which helped in identifying potential human and environmental risks in chemical-using facilities (such as airports, landfills, ports). Ultimately these were used to provide emergency aid workers a preliminary idea of what areas needed to be assessed. It was a humbling experience just to feel part of contributing to something so massive.

There was a lot of controversy around the lack of preparedness. Could you talk a bit about the deficiencies that you saw and examples of how your work may address those deficiencies in future disasters?

I am not a disaster expert, but I think the deficiencies lie in the way we keep approaching them, and not in the emergency response itself. In the aftermath of Hurricane Maria, Disasters and Conflicts carried out a field assessment in Dominica, showing the island’s long list of pre-existing conditions, such as poor infrastructure and outdated waste and water management systems. The hurricane managed to reveal these flaws, and the work proved how equally important it is to acknowledge such physical (not natural) vulnerabilities, in preparing for the next hazard. This is especially significant in a region as vulnerable as the Caribbean, where hurricanes tend to pay a yearly visit.

One of your projects also looked at environmentally degraded areas in Colombia, many of which are neglected due to their primarily black or indigenous communities.

By request of the Colombian government, UN Environment was invited to add an environmental dimension to the ongoing peace agreement. At the time of the internship OCHA was developing a Humanitarian Needs Overview for the country to identify which areas were the most affected. Supporting this, Disasters and Conflicts created socio-environmental thematic maps that showed the overlapping of issues such as displacement, contaminated rivers, landslides, conflicts between armed groups and degradation caused by mining; placing all these different layers helped us identify “hot spots”, and gain a more visual and clearer vision of where humanitarian responses were imperative. Certainly, indigenous communities were the most affected, due to the fact their livelihoods depend directly on natural resources, which were easily lost to ongoing conflicts.

You also worked on a project related to Guatemala.

Yes, the project was created in collaboration with IOM, and dealt with the relationship between migration and the environment. We started with Guatemala as a pilot research, as it has become a migration pinch point for people seeking to arrive in North America, and is one of the sub-region’s most disaster-prone countries. The research focused on finding evidence, or the lack of research on environmental degradation caused by migration, be it international, in transit or internal displacement. It also sought to find evidence of degradation caused by the humanitarian sector, as evidence shows that when the environment is not fully taken into account throughout humanitarian responses, they can actually deepen the crises they were there to address in the first place. The information was based on secondary data, but the aim is to complement it with data from the field in a near future, and to expand the research to Honduras and El Salvador.

What have you found to be the most challenging aspects of your job or of working in development in general?

Prior to the master’s program, most of my professional work came from the private sector in architecture, where for many reasons, things were done at a very fast pace, and with more tangible results. I found myself in the opposite end, where many tasks, either short-term or long-term, had many layers and protocols attached to. This is not to be generalized, as it was my first experience in the development sector, but the personal challenge came in cultivating a lot of patience, and come to terms that the lack of results was not a by-product of the people involved, but of working under such a hierarchical and complex organization as UN.

Are there any mistakes you have learned from?

Yes, not putting enough time aside for sharing our ongoing projects with colleagues from other sub-programs. For sure we are all busy and it t is easy to get caught up in one’s own tasks, but if I could do it again, I would have prioritized this time just as much, to learn even more, and ultimately improve the quality of the work.

What are the most important lessons you have learned through this internship?

One main take-away is learning to see  things through an environmental lens, which did not come naturally to me having such a technical background in architecture. I see the value in this now as our natural environment is more than ever a cross-cutting issue, that must factor into whatever work you are doing. One of the main tasks of the internship was to create a monthly bulletin that analyzed all the disasters happening in the region. The “environmental lens” required analyzing and describing how the disasters not only affected each area’s natural processes, but ultimately what impact this could have on community livelihoods, and on the potential for a humanitarian crisis.

Had you planned on going back home to Central America to work after the master? Did your native background aid you in the work you carried out?

Not at all. After the master’s program I was keen to work outside of the Latin American region, to expose myself to different environments, but this was an opportunity I couldn’t pass up.

Yes. Having lived, worked and traveled through Central America most of my life made the work easier. Most of the research for Disasters and Conflicts evolved beyond the environmental aspects of each country, and required a thorough understanding of their unique backgrounds, such as their political structures, the basis of their economies, and the social crises being faced. The distinction between Honduras and Panama serves as an example – two countries with very similar climates and geographically proximate, but with entirely different capabilities when it comes to handling environmental issues.

What advice would you give to our students or anyone interested in a similar career path?

Not letting your professional background put you in a box of what you can or cannot do, this sentiment comes from such recent experience. As an architect in UN Environment, I felt like a fish out of water, but it was an incredible opportunity for being surrounded by expert professionals in disasters, geography, green economy, climate change and biologists – a great mix! Have I had chosen a different path, I wouldn’t be able now to add a strong environmental component to my future work, so go out there and get into these out-of-your-comfort-zone situations, they will force you to grow and give you different working perspectives.