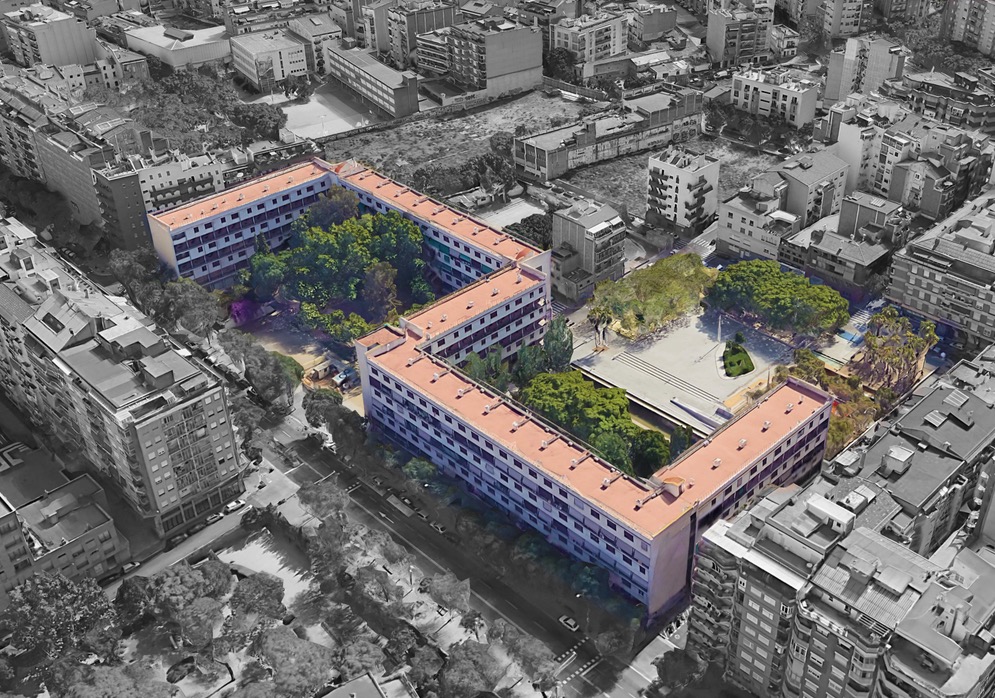 By adminJanuary 17, 2018Blog
No Comments

For two weeks in December, our students were immersed in our yearly workshop with a local partner on local issues, this time collaborating with Barcelona City Council’s Ciutat Refugi program that handles the reception, accommodation and care of asylum seekers.

Titled “Mapping Mobility and Relocation”, the workshop undertakes a socio-spatial anaylsis of refugees currently being temporarily housed in Barcelona’s Casa Bloc to track their use of the neighborhood’s services and facilities, especially in terms of mobility and displacement. It is the first study of its kind in Barcelona to collect data on the relationship between refugees and the urban context.

“This is the first time that the City Council and the Red Cross have access to this kind of information,” explains codirector Carmen Mendoza Arroyo. “Without a record of how refugees interact with their urban surroundings, it is very difficult to make changes to the current system. Our analysis contributes to the city’s objective of improving the urban integration of refugees and asylum seekers.”

Our students were tasked with producing a series of physical maps that graphically evidence their state of exception and lack of integration with the objective of informing the city’s plans to develop a long-term housing model and improve the integration of the refugee population.

With an unprecedented number of people displaced worldwide, and particularly with the influx of refugees fleeing war, violence or natural disasters, the issue of preparedness of host countries as well as the integration of newcomers into societies is a core issue for all European cities. In addition to emergency response, developing an integrated development plan is crucial to achieving a resilient integration process. Considering that out of 65 million displaced people in the world, 60% will be going to cities, the real challenge lies in developing strategies adapted to urban contexts and that do not threaten the well-functioning of the host cities themselves.

Despite the refusal of the Spanish government to host refugees, there are over 2,000 refugees from 88 different nationalities today in the city of Barcelona, a number that increased by about 67% from 2012 to 2016. As a self-proclaimed ‘Refugee City’ since 2015, Barcelona has developed a special reception and integration plan to support these refugees and prevent their marginalization, but given the lack of flow of information from Spain’s central government concerning the number of incoming refugees and other essential data, the task has proved difficult. As a result, refugees face a long and uncertain process until they are allocated a place to live, which is only temporary. This is the case of refugee families currently being house in the iconic Casa Bloc building in Sant Andreu, Barcelona, and who must start again after six months a new destination.

Though housing refugees in an existing building can seem an effective strategy to insert them into the social fabric and place, integration is largely disrupted when they are forced to move to another location. From a physical integration perspective, urban refugees must connect to the neighborhood and create an identity within this new urban place. As UN-Habitat (2016:2) states, “spatial organization, patterns and design of urban space can promote or hinder social cohesion, equity and inclusion.”

Our workshop focused on analyzing and visualizing how refugees experience a neighborhood at a physical level in order to expose their state of exclusion, illustrate how displacement affects the integration of refugees, and inform policies that improve integration and aspire to more permanent housing solutions. Working in groups, students produced a series of socio-spatial maps that reflect the experiences of five refugee persons or families living in the Casa Bloc, including the building’s performance as a temporary shelter, how refugees use open spaces, public facilities and transport services, and the level of access to and participation in cultural-civic activities and organizations in the area. Based on their observations, here are some of their recommendations in each category:

Transform some of the building’s public spaces that are currently used for parking and circulation into spaces for interaction, leisure and play; recuperate a public park that was privatized; designate areas for artistic expression.

Reactivate open spaces through events and activities such as urban gardening, upgrade existing urban furniture and introduce more elements to increase use.

3. Use of Public Facilities

Reduce limitations in access to facilities in terms of cost and payment restrictions, and language barriers; improve communication of services and activities to refugees, and allow access to labor insertion services like Barcelona Activa.

Students presented their findings and proposals to the City Council and the Red Cross on December 20th at Ateneu L’Harmonia, serving as the first in a series of studies made to improve the urban integration of asylum seekers in Barcelona.

This post has been updated to reflect the outcomes of the workshop.