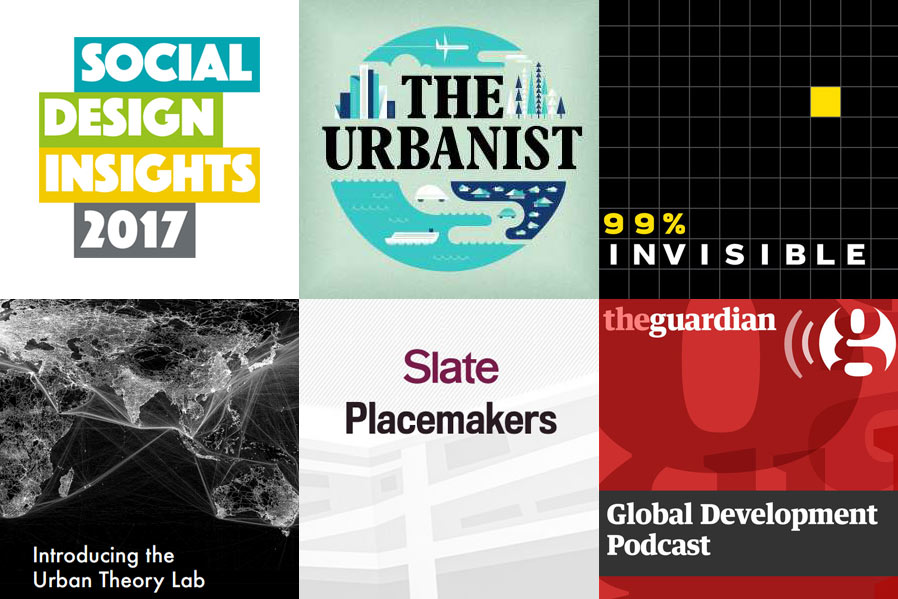 Situated at the intersection of architecture, urban planning and development, our master program seeks to reclaim the social commitment implicit in spatial practices, training a new generation of architects to build healthier, more equitable and inclusive urban environments, especially those affected by poverty, conflict, disaster and rapid urbanization. So whenever we come across resources like books, more books, blogs, lectures and of course, free books that help to bolster our knowledge of these practices and contexts, we make a list. Now that podcasts are the new blogs, here is a starter kit to some of the best series spanning the topics of architecture, social impact, cities, development and emergency, with a few individual episodes added in for good measure. Enjoy!

The Curry Stone Foundation, in celebrating the 10th anniversary of its eponymous design prize noted for honoring social design, has just released a new podcast that will profile 100 firms over the next twelve months as members of its “Social Design Circle.” The selection is, refreshingly, not as U.S-centric as the content in other podcasts in this list, with studios like Arquitectura Expandida, PICO Colectivo and Recetas Urbanas featured in its first batch of interviews under the theme Should Designers Be Outlaws?. We’re proud to say the show is co-hosted by Eric Cesal, who will join our program this year as a scholar and as a guest speaker of our Development by Design conference in Febuary, and who profiles two of our guest professors, Teddy Cruz and Fonna Forma, in the first two episodes.

One of the most popular podcasts on iTunes, this fun and original series is about all the thought that goes into the things we don’t think about — the unnoticed architecture and design that shape our world. Topics include everything from McMansions to Alejandro Aravena’s Half a House.

All things urban are up for debate on Monocle’s guide to making better cities.

Design Observer’s look in to the world of design with Jessica Helfand and Michael Bierut has included episodes like Basic Human Needs, which discusses IKEA’s shelters for refugees.

From Slate, stories about the spaces we inhabit and the people who shape them, told by real people and real communities.

Harvard GSD’s series of conversations with major urban thinkers like Ananya Roy about the challenges of developing new forms of urban theory and practice that are adequate to early twenty-first century conditions.

Not a podcast per se, but NPR’s Series On Urban Life In The 21st Century features short, 6-8 minute audio audio versions of each of it’s published articles.

The Guardian’s monthly podcast features an in-depth discussion on a particular issue relevant to development. Not to miss: Inside Colombia’s City of Women.

Among their many podcasts about refugees, the Refugee Studies Center recently released several podcasts specifically on the topic of shelter with noted experts in the field:  Lessons from 15 years of post-disaster shelter reconstruction projects in India with Tom Newby, Complicit or emancipatory? Architecture, space and design in humanitarian operations with Camillo Boano (also a guest professor of our program), and Shelter in Flux with Cathrine Brun.

12. HPCR Podcasts By Program on Humanitarian Policy and Conflict Research

From Harvard University, for those looking to delve deep into the complex world of humanitarian policy and increase their knowledge of modern issues related to humanitarian action.

As it has done on its blog since 2011, FA’s new podcast (released in June 2018) addresses architecture in the context of “social justice and climate justice, pop culture and subculture, representation and imagination, and everything that happens after the building’s been built.”

This episode of This American Life features stories from Lower 9th Ward in New Orleans, the area that’s been the slowest to rebuild after Hurricane Katrina.

15. Building for the Worst Case Scenario

The Stitcher Episode 103 features thoughts from postdisaster expert Eric Cesal, cohost of the first podcast on this list, on what it will take to make our cities and our regions more prepared for what climate change has in store.

BBC’s The Forum interviews postdisaster architect and author of Beyond Shelter Marie Aquilino (another guest professor of our program!) on building back better in post-earthquake Haiti.

An episode of the IMC International Development podcast about the current state of play in post-disaster recovery and reconstruction programs.

Have any more? Let us know in the comments!