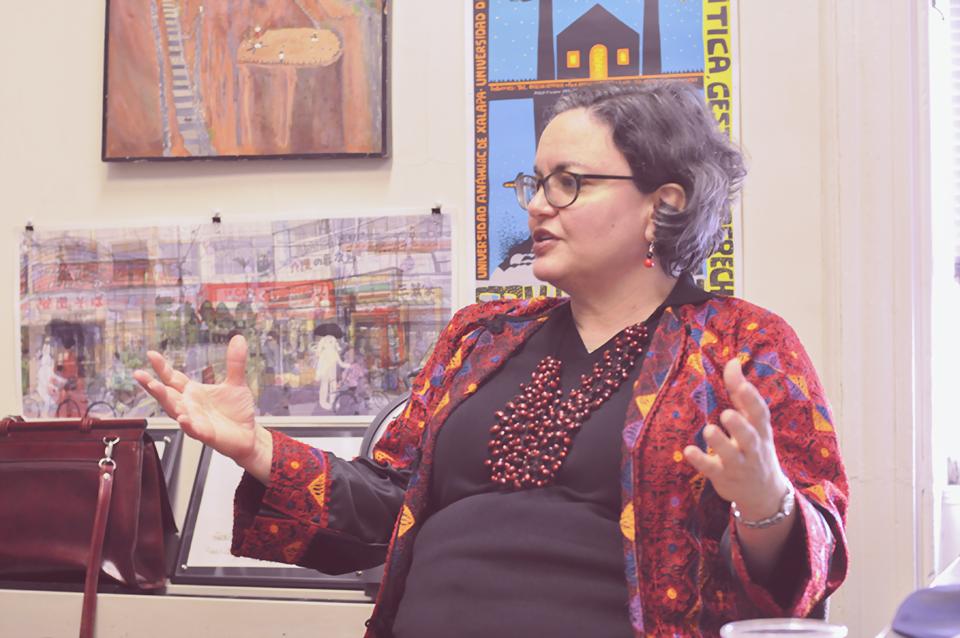 By adminJanuary 9, 2017Blog, Events
No Comments

Next Monday January 16th, the second edition of our Development by Design conference continues with our second talk by Clara Irazabal, urban planning expert specialized in the Latin American informal city who will talk about her first-hand account of collective housing movements in Brazil in their struggle towards restorative spatial justice. The event will take place at 7pm at the Roca Barcelona Gallery (see map).

Formerly the director of the Latin Lab and professor the GSAPP at Columbia University, Clara is currently the Director of the Latina/o Studies Program and Professor of Planning in the Department of Architecture, Urban Planning + Design at the University of Missouri, Kansas City. As one of our visiting professors for the last four years, she is currently here to lead her workshop on Learning from Latin American Cities: Planning and Urbanization as part of our master program. Read more about Clara here and watch our interview with her below.

Organized in collaboration with Roca and conceived by our master program to highlight the role of architects and designers in contexts of poverty, disaster, conflict and rapid urbanization, the conference series builds on our first edition in 2014 which featured speakers Nathaniel Corum, Teddy Cruz, UN-Habitat and Worldvision. Our second edition, a three-part series, launched last December with Venezuelan architect Alejandro Haiek, and is followed by Clara Irazabal next week and postdisaster expert Eric Cesal (cohost of the new Social Design Insights podcast) in February. In each talk, our speakers recount their experiences working with affected communities across the world, highlighting new approaches to the provision of shelter, housing, spatial justice and resilience.

There’s limited seating, so register here and join the event on Facebook. All are welcome to stay after the conference for free snacks and drinks.

Here is the information on all three lectures:

Participation may be the new mantra among architects today, but it is still a rare thing for communities play an active, and moreover, equal role in the design and construction of their own spaces. Through examples of his collaborations with barrio communities across Caracas, Alejandro Haiek illustrates how a democratic approach to placemaking can unlock the potential of marginalized communities and strengthen their agency in the process. *(This session will take place in Spanish.)

Alejandro Haiek is a Venezuelan architect and cofounder of LAB.PRO.FAB, a laboratory for projects and fabrication that collaborates on community-led initiatives in the informal barrios of Caracas. His bottom-up approach leverages existing participatory frameworks, reactivates underused urban spaces and crosses technical expertise with local intelligence to build socio-productive spaces in low-income areas. The lab won the International Award for Public Art in 2013 for the Tiuna El Fuerte Cultural Park, participated in the 15th Venice Biennale, and was most recently a recipient of several awards at the XX Architecture Bienal of Quito 2016.

In Brazil, social housing movements led by the country’s precariat–the urban poor–are seizing vacant buildings and land to create their own access to decent housing in lieu of the government’s failure to do so. Based on an ethnographic study of several occupations in Rio de Janeiro and Sao Paulo this year, Clara Irazabal analyzes how these collective movements propose a valid alternative planning model that can serve as a vehicle for restorative justice.

Clara Irazabal is Director of the Latina/o Studies Program and Professor of Planning in the Department of Architecture, Urban Planning + Design at the University of Missouri, Kansas City. She was previously Associate Professor of Urban Planning and Director of the Latin Lab at the Graduate School of Architecture, Planning and Preservation at Columbia University, New York. In her research and teaching, she explores the interactions of culture, politics, and placemaking, and their impact on community development and socio-spatial justice in Latin American cities and Latino and immigrant communities.

As the world faces an escalating threat of disaster, the solutions for resilience seem obvious: build better and smarter, and invest in infrastructure. Yet we often ignore common sense approaches and build ever-higher levels of risk into our built and natural environments. In his talk, Eric Cesal will explore contemporary contradictions in disaster and resilience, dissecting the social, legal and economic forces that drive risk into our built environment.

Eric Cesal is an analyst, writer, designer, builder and humanitarian based in San Francisco, CA. He grew up in Washington, D.C. and holds an undergraduate degree in Architectural Studies from Brown University and Master’s Degrees in Architecture, Construction Management and Business Administration from Washington University in St. Louis. He was Architecture for Humanity’s last executive director, after having worked with the organization since 2006 and led its Haiti Rebuilding Center from 2010-2012. His book, Down Detour Road: An Architect in Search of Practice, is a memoir/manifesto that is widely acknowledged as a roadmap to 21st century architecture.