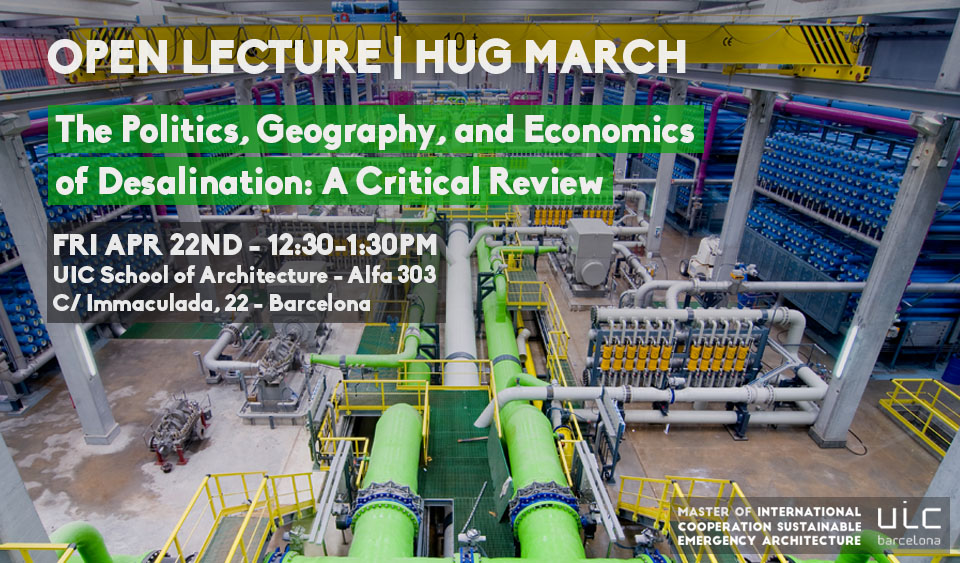 Open Lecture on The Politics, Geography and Economics of Desalination

Join us this Friday for an open lecture by our guest professor Hug March on The Politics, Geography and Economics of Desalination, which will discuss to what extent desalination constitutes a radical break with the old 20th century hydraulic paradigm and questions whether it risks repeating the same mistakes, thus becoming a maladaptive strategy to cope with 21st century global water issues:

In the light of the collapse of the hydraulic paradigm, the intensification of the impact of climate change on the water cycle and rising global demands, desalination is portrayed as the solution to 21st century water issues. Led by state-led desalination programs, but also with a strong participation of the private sector, the emergence and development of desalination has been geographically uneven in the last decades. Desalination has its drawbacks, not only in terms of environmental sustainability, because of the intensification of the water-energy nexus, but also due to distributional issues that surround the access to desalinated water. These drawbacks are reviewed in detail and exemplified with reference to the case of Spain.

A PhD of Environmental Sciences, Hug focuses his research on the political ecology and economy of urbanization and has contributed to debates around urban water infrastructure and water provision.