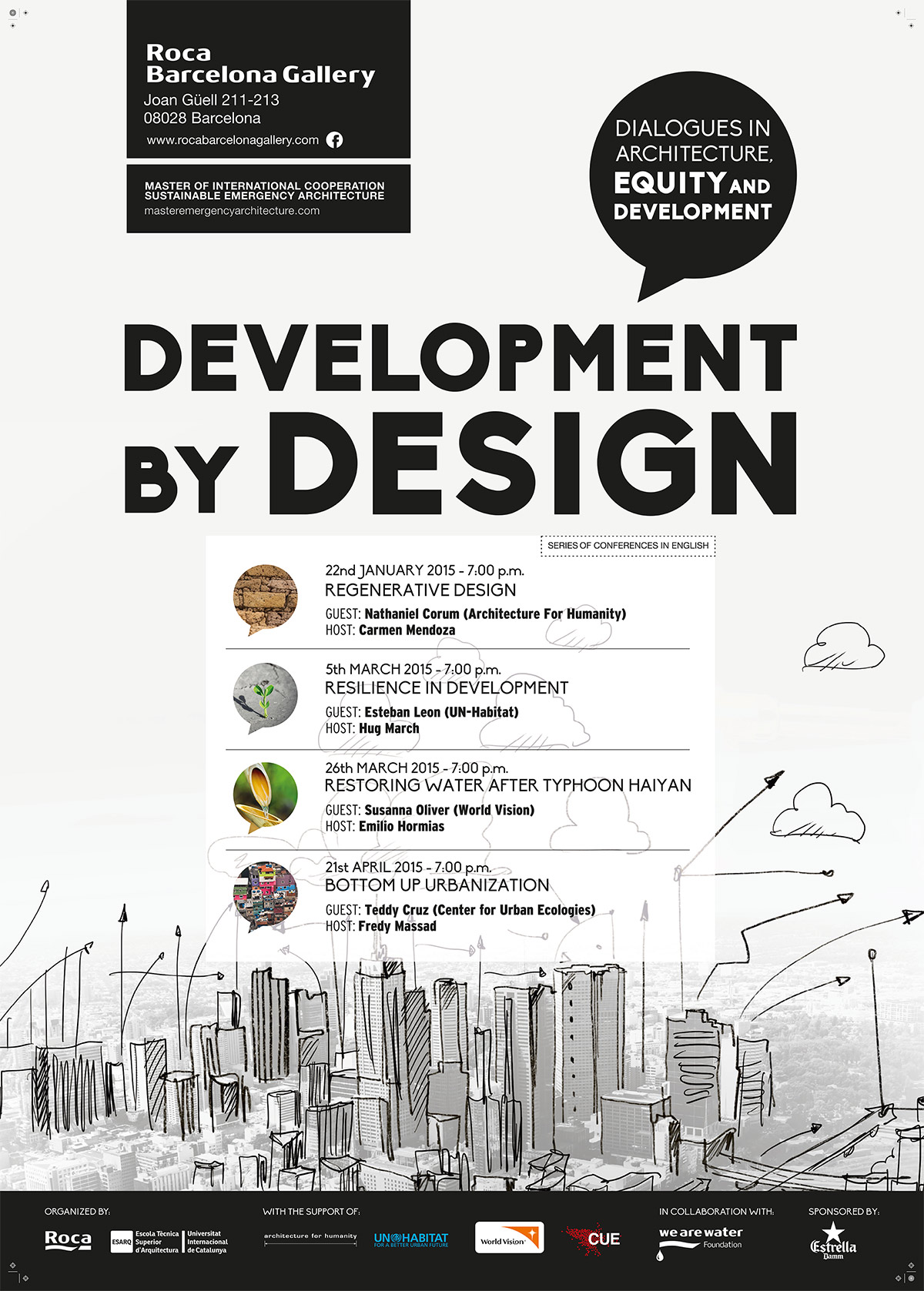 We’re excited to announce the launch of an event series titled Development by Design: Dialogues in Architecture, Equity and Development, conceived by our master program to highlight the role of architects and designers in contexts of poverty, disaster, conflict and rapid urbanization. Organized in collaboration with Roca, a total of four one-on-one conversations spanning from January to April will foster debate on the issues surrounding the practice of architecture and design particularly in the field of development and in the construction of cities in general. The events will take place at the Roca Barcelona Gallery.

In these conversations, we pair up a special guest from respected agencies and NGOs from the development field with one of our own staff or ESARQ-UIC faculty. Our faculty will navigate discussions with renowned practitioners like Nathaniel Corum and Teddy Cruz and experienced professionals from NGO’s like UN-Habitat to hash out the key issues surrounding each theme, allowing the audience to listen in on and take part in a lively and meaningful discussion.

The program includes the following four dialogues (scroll down for speaker bios):

Unchecked urban growth has led to large-scale problems that present great challenges and opportunities in moving towards a more just and sustainable future. Resilience, sustainable urban development, the effects of mass migration on cities, community participation, post-disaster response and disaster risk reduction are key issues within our master program that deserve a spotlight beyond the classroom and have special resonance with practitioners and even the general public today.

Make sure to stay tuned for more info and reminders of each dialogue here or through Facebook and Twitter. Invite your friends…we hope to see you there!

Nathaniel Corum | Born in Boston and trained as an architect, Nathaniel Corum is currently partner of Sustainable Native Communities Collaborative in Enterprise Green Communities and Partner of the Educational Outreach Program of International Design Studios in Architecture for Humanity. With his work, Nathaniel supports culturally and environmentally sustainable affordable housing through capacity building, technical assistance, and research of best practices. He brings academia closer to the real-world challenges by connecting students in workshops and design build projects, thus supporting Architecture for Humanity’s mission of providing architectural solutions to humanitarian crisis and bringing services to communities in need. Some of his collaborations include post-tsunami Japan (through Pac Rim Studio), post-flood Rio de Janeiro (Brazil), post-quake Christchurch (New Zealand) and Port-au-Prince (Haiti).

Carmen Mendoza | Originally from Bolivia, Carmen obtained her architectural degree from the Autonomous University of Central America in Costa Rica and developed her PhD in Urban Design and Planning in the Polytechnic University of Catalunya in Barcelona. She is now Associate Professor and co-director of the Master of International Cooperation in Sustainable Emergency Architecture at ESARQ-UIC. Her research focuses on the analysis of territorial structures and the development of integrated approaches in urban regeneration projects, with specific attention to the physical and social regeneration of degraded neighborhoods in the Metropolitan Region of Barcelona and informal settlements in South America. As member of the Steering Committee of UIC’s Master’s Degree in Urbanism (Regenerating Intermediate Landscapes) and as co-director of the Urban Design and Regional Planning Lab (LAU), she supports holistic design processes, considering scale and needs of local communities in order to achieve sustainable development.

Dan Lewis | With more than thirty years of experience in humanitarian, transitional and development work, Dan Lewis is now Chief of UN-Habitat’s Disaster and Post-Conflict Section (DPCS) based in Kenya. He initially worked as civil engineer and private consultant in urban reconstruction and housing programs in South Africa and Chile, as well as with First Nation communities from his home region in Canada. Dan currently manages the UN-Habitat’s global portfolio to address the impacts of political conflicts and natural disasters in Africa, the Middle East, South and South-East Asia, South Pacific Small Islands Region, North America and South America. He is Director of UN-Habitat’s City Resilience Profiling Program (CRPP) headquartered in Barcelona, which focuses primarily on bringing together actors of different sectors to disseminate information, network with academia, exchange knowledge, and define best practices to build urban resilience.

Hug March | Hug has a Ph.D. in Environmental Sciences from the Universitat Autònoma de Barcelona (UAB), 2010 and is a research fellow at the Internet Interdisciplinary Institute (IN3), Universitat Oberta de Catalunya and was also a researcher in the Department of Geography UAB and visiting predoctoral researcher at the School of Environment and Development, University of Manchester. His research, focused on the political ecology and economy of urbanization, has contributed to the debates around urban water infrastructure and water provision. He has contributed to more than 20 publications in national and international journals in the fields of Geography, Environmental Studies/Sciences, Urban Studies and Economics, among other disciplines.

Susanna Oliver | Susanna is project manager and head of the Catalunya office of Worldvision, one of the largest relief and development organizations in the world. She has extensive experience managing aid projects in developing countries with the organization, which recently collaborated with Roca’s We Are Water Foundation in providing safe access to water for over 500 families after Typhoon Haiyan in the Phillipines by supplying each family with two 10-litre drums for collecting and purifying water.

Emilio Hormias | Emilio is an architect, Associate Professor at EPSEB-UPC, and Coordinator of the NGO University without Borders (USF). He implements social and educational facilities and planning projects in developing countries and his research is focused on building restoration and low-cost materials. He is also co-founder of the firm Bestraten Hormias Arquitectura in Barcelona.
//Dialogue 4 – APRIL 21st//

Teddy Cruz | Teddy Cruz, architect of Guatemalan origin, currently works as associate professor of Public Culture and Urbanism in the Visual Arts department of the University of California in San Diego (UCSD). He is advisor to the City of San Diego on Urban and Public Initiatives, director of the Center of Urban Ecologies, and co-director of UCSD-Blum Cross-Border Initiative and Civic Innovation Lab. Teddy has based most of his work in the Tijuana-San Diego border region and is recognized internationally for his bottom-up artistic, architectural and urban projects. By viewing informality not as precariousness but as social practices of adaptation and creative intelligence, Teddy brings to life new forms of citizenship, governance, social organization and infrastructure. His most recent awards include the Academy of Arts and Letters in New York City’s Architecture Award and his nomination by Fast Company Magazine as one of the 50 Most Influential Designers in America.

Fredy Massad | Fredy Massad studied architecture in Argentina, his country of origin, and is a researcher and critic of contemporary architecture. He is lecturer at ESARQ-UIC of Theory and Criticism of Architecture and co-founder of ¿btbW/Architecture. In previous years he coordinated the architectural section in a Spanish contemporary art magazine called EXIT Express. Fredy currently writes the blog La viga en el ojo in the online version of the ABCnewspaper. As writer, author and co-editor of several publications, he analyzes the ideological and political debate of architecture in modern society. He is often guest speaker in international conferences and universities which focus on dialogue, debate and opinion-making on topics related to the architectural world. Fredy invites us to value criticism, be aware of the responsibility that criticism entails, and most importantly, reflect on the reality of architecture from different perspectives.