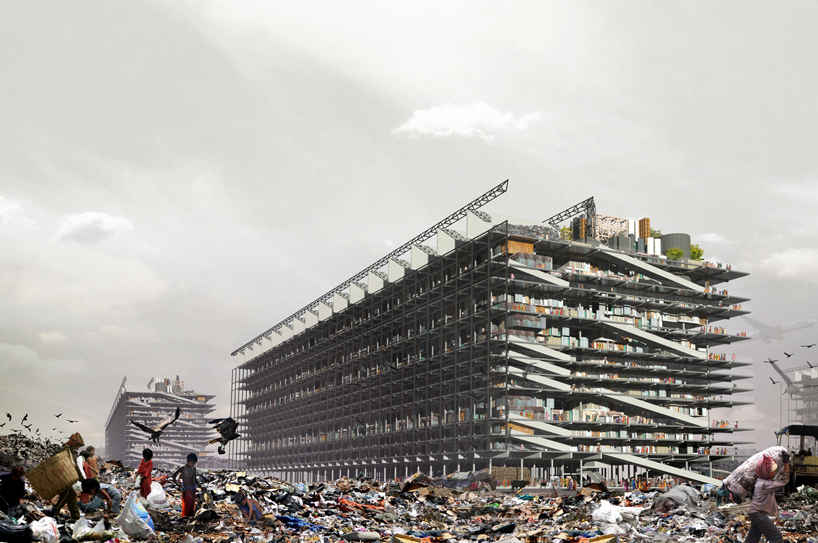 A spontaneous debate on the architecturalization of slums

By adminSeptember 25, 2014Blog, NewsBites
No Comments

As one of the main issues of our program, we talk often about the informal city and work on real-world projects that explore the role of participative design in improving the living conditions of this ever-growing urban context. The surge of interest in this urban phenomenon, however (thanks or due to its portrayal in mainstream media and architecture circles) has given rise to the architecturalization and aestheticization of slums and an often superficial treatment by architects and non-architects alike.

An interesting debate recently unfolded on Ethel Baraona‘s  Facebook profile after having shared the link of UGO’s ‘Let’s talk about garbage’ by Polish firm UGO architecture and design, a proposed “solution for the occupants of Dharavi,” one of Asia’s largest slums. The debate that ensued questioned the nature of the proposal, which essentially formalizes the slum into a massive vertical and more “functional” one, according to the architect. Is an “architectureless” slum better served by a designed dystopia? Does it at all address the systemic issues of sanitation, poverty, politics, etc., that produced such a place? As someone who has not so much as even been to India or Dharavi itself, is the architect making an obscure detached critical statement or is it merely what it appears to be: a well-intentioned proposal that is just as simplistic as it is naive? Why, in short, do some architects insist on formalizing a system that is essentially void of intentional design, as if relying on formal qualities to solve social problems?

The debate gathered comments from various noted bloggers and writers, including Fosco Lucarelli, Cesar Reyes, Nick Axel, Joana Sá Lima and others, and provoked a further thread of indignation after stumbling across the existence of the perverse concept hotel Emoya Luxury Hotel & Spa, a self-described luxury shanty town where rich people can pay to holiday in a pretend slum, and–wait for it–“first ever shanty town in the world equipped with under-floor heating and wireless internet access.”

Whether it is some architects or the media that propagate this disregard for the seriousness and complexity that characterizes the informal city, the insiduous rise of favela-porn undermines the public’s genuine understanding of a critical issue, not to mention the hard, less conspicuous work of many architects and designers today.

You can read Ethel’s synopsis of the debate at her blog and read the thread almost in its entirety transcribed at The Funambulist. We’d love to here your opinions! Join in on the conversation there or in the comments below.