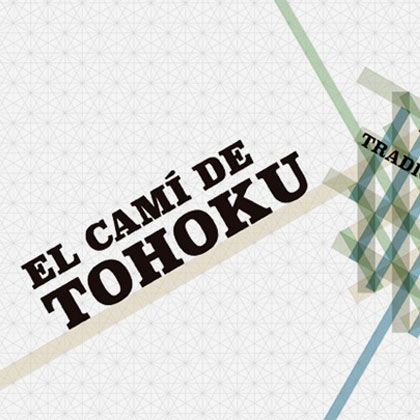 The Path to Tohoku: Nature, Tradition and Innovation at Palau Robert

From 4 July to 31 August, the Palau Robert (Barcelona) presents an exhibition of craft and design items from the region of Tohoku in the north-east of Japan, which was devastated by a magnitude-9 earthquake followed by a tsunami on 11 March 2011. Since that date, the tragedy motivated several initiatives to give solutions and international help to the affected area.

“The Path to Tohoku: Nature, Tradition and Innovation” features a selection of exhibits made using materials from Tohoku, ranging from everyday utensils to accessories and jewellery, craft items from this region that convey the ancient wisdom of Japan. After the earthquake, some workshops have managed in recent years to begin a gradual recovery and are thriving once again thanks to new and original products, while the area as a whole is reviving and the appreciation of traditional techniques is rising thanks to the collaboration of young designers.

The exhibition, curated by Yoshihide Kobanawa and Kaoru Fujii founders of the Kobfuji Architects studio, is divided into three areas:
Anonymous traditional craftsmanship. This space shows everyday utensils and toys made by anonymous artisans, mainly from the prefectures of Miyagi and Fukushima.
Innovation applied to traditional crafts. In this second part are displayed new products coming out of the union of craftsmanship and innovative designs. These products aim to adapt the tradition to the demands of contemporary life, and at the same time looks for new access and opportunities of sales in the international markets.
Arts and social innovation. This section includes innovative projects that emerged from the work of young social entrepreneurs and the collaborations of designers committed with several areas affected by the tsunami. Combining traditional techniques with local materials, these projects will create new jobs for residents and also attract young people to these areas: an interesting example of reconstruction of local communities through design.

About the Hasekura Program

The Hasekura Program is a not-for-profit organisation registered in Barcelona named after Hasekura Tsunenaga, the samurai who led the first Japanese mission to Spain in 1613.

The exhibition “The Path to Tohoku” is one of the initiatives that are part of the Government of Catalonia’s 2012-2015 Japan Plan, drawn up with the aid of the Consulate General of Japan in Catalonia, the purpose of which is to consolidate Japan’s important role for Catalonia and to strengthen Catalonia’s presence and prestige in Japan. It also coincides with the Dual Spain-Japan Year commemorations to mark the 400th anniversary of bilateral relations between Spain and Japan.