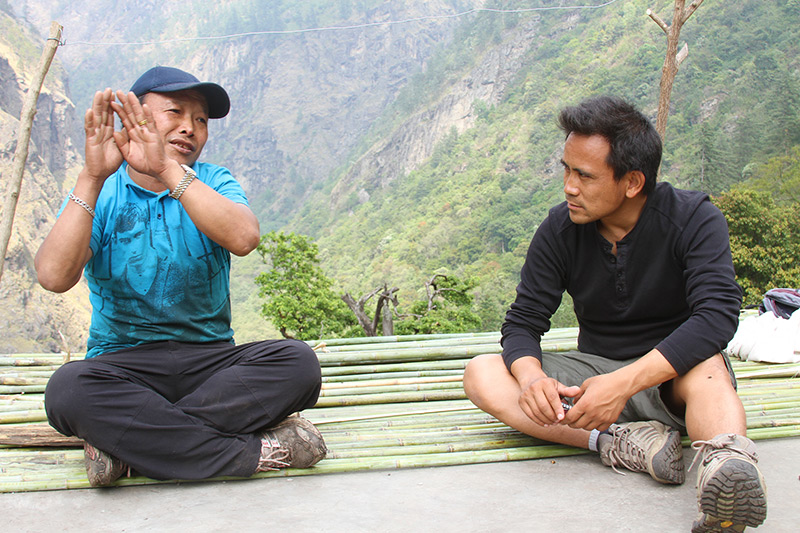 Class of  2012 graduates Sonam Lama and Ella Chau have released their trailer for a documentary that brings to light a controversial road development that is threatening the preservation of architectural landmarks in one the most isolated regions of the Nepalese Himalaya. The film is a first-time portrait of the remote valley of Tsum and its precious mani, or ancient monuments, and of how the lack of community involvement in development projects can lead to the irreparable loss of cultural heritage crucial to the sustainable development of a region and its people; a silent disaster which often goes unreported by the media.

The project began since Sonam (above, right), an architect, graduated from our masters program and started walk4heritage, a first-ever inventory of monuments in his home region of Tsum in October 2012, which aims to compile up-to-date field information on architectural heritage and make it accessible to government officials, policy makers, development experts and local communities in order for them to make informed and responsible decisions in the event of infrastructural developments.

After extensive talks with residents, local non-profits, the Nepal Engineering College, the Nepal Transportation and Development Research Centre and the arrival of a bulldozer on site without prior warning, Sonam realized the urgency of the situation and set up the Tsum Conversation & Development Committee (TC-DC), through which he assists the community in deciding a better re-alignment of the road to protect monuments from destruction. Construction of the North-South Highway connecting China and India had already begun digging in the area with no supervision and destroyed private agricultural fields without providing any compensation.

It was only natural that Sonam teamed up with his fellow classmate Ella Chau (above), an architect and filmmaker with an interest in development since our masters program, to document this dire situation in need of exposure. “Earlier this year, I was working in a commercial design firm in Singapore, but I was hugely unsatisfied with the nature of commercial work. So I decided to quit my job and pursue the making of this documentary with Sonam last April.”

Through this film, Sonam and Ella aim to garner support for the Tsum Conversation & Development Committee, protect Tsum’s architectural and cultural heritage and promote better planning and infrastructure development in this remote region. The film introduces the major types of monuments found along the ancient salt-trade route and pilgrimage foot trail, and exposes the voices of the Tsum community for the first time through intimate interviews both against and in support of the road development that reveal the complex issues of sustainability and preservation in the face of progress and modernization.

Will the Hidden Valley of Happiness be no longer? Or can collaborative efforts with the local community develop alternative proposals that enable both progress and preservation?

We wish Sonam and Ella the best of luck! Please share the trailer and like its FB page to help them raise awareness on the past and future of the Tsum Valley and protect Nepal’s priceless architectural heritage.