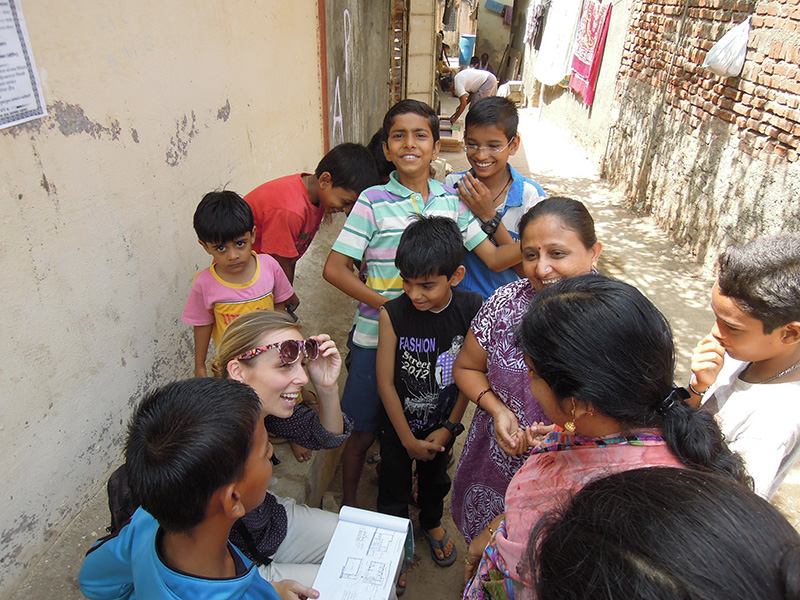 Conducting toilet studies in the slums of Mumbai

There’s always a first time for everything and in this line of work, it may not be pleasant, but it is certainly rewarding. Our student Tara Whelan tells about her daunting task of conducting toilet studies during her internship with SPARC in their aim to improve sanitation in the slums of Mumbai.

When I realized that my internship at SPARC was going to focus on conducting toilet studies rather than slum upgrading, I was a little less than thrilled. Not only because it doesn’t relate to my particular research topic, but because of the dirty work that it entailed. My job is to accompany coworkers deep into the slums of Mumbai on a scavenger hunt for public toilets, which we make drawings of for evaluation purposes. Essentially, we track down the filthiest corners of the city’s most uninhabitable places–in unbearably hot and humid weather–to hang out and talk to people about, well, shit.

In a way, the adventure did draw my interest; wandering through the mazes of informal settlements to witness first-hand how the majority of people live was something that I would never have gotten to do on my own. In other words, the exploration part of the project was intriguing; it was the toilet-studying part that wasn’t quite so much. I must say, however, that I handled it quite well! I had half-expected to run the other way, and even some of my coworkers had to cover their mouths while walking around, while others made an instant U-turn after entering especially bad toilet buildings.

Often it wasn’t even the the toilet block interiors that bore the worst conditions, but rather, the surrounding areas used as dump sites. Instead of being connected to any sewer or septic tank, the toilets regularly drain into open water and have been doing so for the past ten years. This pretty much reduces the function of the buildings to providing privacy rather than proper sanitation and sewage systems. Our objective was to assess the causes of these malfunctions, damages and lack of maintenance and to suggest improvements.

In the end, I feel that I got so much more out of these site visits. As someone who has had very limited contact with urban poverty, visiting informal settlements reminds me how the people living there are just like the rest of us. If you were to judge by appearances, you would never even know that they lived in slums. They are just unlucky people trying to make the best of an unaccommodating city. Being able to talk to community members and watching people live their day-to-day routines revealed how similar their needs are to my own. I was usually inspecting the toilets first thing in the morning (peak hours), and after seeing how valued they are I can’t imagine how difficult it must be for communities that still don’t even have these inadequate buildings to use and are left to find a bush somewhere – which can be pretty difficult in Mumbai.

As my internship is coming to an end, I am grateful for having been able to participate in a project that works so closely with the beneficiaries and the real issues that they face by living in informal settlements. It allowed me to see first-hand what a difference proper sanitation and basic services really makes and become familiar with the city’s development plans, housing policies and the history of their struggle. So next time my work requires me to get cozy with the armpits of the city, hopefully I can start off with a smile!