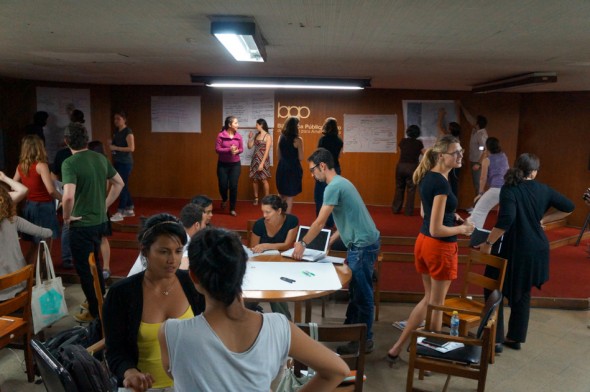 This year’s field trip to Medellín made headlines in local media thanks to its collaboration between academia, government and local community and its efforts to stir a debate on the implementation of current planning projects in Medellin, Colombia, specifically the Green Metropolitan Belt proposal.

The popular Colombian evening talk show Nos Cogió la Noche featuring round-table talks on political and economic issues, invited our workshop leaders–Carmen Mendoza (ESARQ-UIC), Clara Irazabal (Columbia University, NY)  and Catalina Ortiz (Universidad Nacional de Colombia)–to discuss the aim of the international planning studio and its role in the city’s current plans to “green” its borders as a way of halting the sprawl of the informal setttlements that characterize its hillsides. (Note: Videos are in Spanish. Watch Part 2 at the end of the post!)

View of the urban fringe of Medellín, Comuna 8

Our students at work during the international workshop

Anibal Gaviria‘s bold green belt plan is a 75 kilometers long (46 miles) park on the slopes that surround the city set to provide new public facilities and transport systems, restrict the growth of informal settlements and protect natural reserves. Costing a whopping 283 billion US dollars, the project has received a few hopeful reviews in the midst of harsh criticism for its generic nature and above all, for its failure as of yet to consult and involve the residents who will be affected by the plan. Few specifics, if any, have been revealed about how funds will be distributed, what the environmental conservation model is, how it will curb exploitative new development, and what they plan to do with the residents who will be forcefully displaced by the project (more in Spanish here). Local communities pertaining to the 16 comunas that comprise the six zones of Medellín have protested again their lack of inclusion in the mayor’s plans.

Our students attended a protest march organized by Comuna 8  in which they demanded their right to participate in deciding the future of their own neighborhood. © creacionlibertaria on flickr

In protest: “Mr. Mayor, Showcasing a project is not building with the community. We demand respect.”

In an effort to address these issues and propose alternative strategies for delimiting the city’s borders and preserving its natural heritage, our workshop collaborated closely with Comuna 8 to devise new ways of intervening that take into account the needs and desires of this marginalized community, which is subject to frequent bouts of urban warfare. You can take a look at the students’ proposals at the workshop’s blog.

Watch Part 2 for a continuation of the talk about the workshop and its implications for the reconfiguration of the urban fringes of Medellín in the video below.