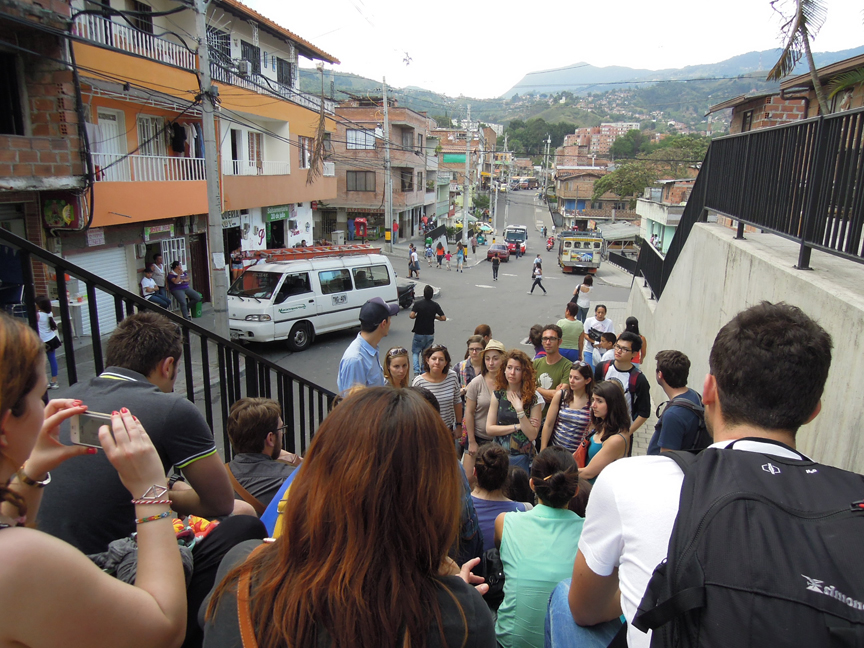 Our students in Medellín. photo by Allison Koornneef

As we announced in our last post, our students and co-directors  spent Easter break in Medellín, Colombia, where they took part in the workshop Rethinking the Urban Fringes in Medellín, Colombia: Alternative intervention models. The joint workshop–a collaboration between our UIC students, students from the  Universidad Nacional de Colombia and the Graduate School of Planning and Architecture of the University of Columbia, NY, as well as the Management Council of Commune 8 (CPG), was a huge success and a intense learning experience for everyone involved, making headlines in local news channels and forging partnerships with local communities in their quest to improve living conditions in the urban fringes of Medellín.

The aim of the international planning studio is to debate the implementation of current planning projects in Medellin, Colombia, specifically examining the Green Metropolitan Belt proposal, and proposes to build up models for alternative intervention in the urban fringe involving community actors as crucial planning partners.

As explained on the blog, the workshop “provides a platform for conducting pedagogical proposals that, in turn, serve to address the needs of communities and develop technical skills in students. By delving into a real, local problem we hope to generate a place for reflection on the complex socio-spatial issues facing interdisciplinary planning exercises, and explore the ethical and professional responsibilities that arise when interacting with partners. The role of the workshop in the master’s program is to create an ​​academic work that poses the unique challenges of real-world interdisciplinary planning projects.”

In this way, the objective is “to produce critical debate on the border intervention strategies through the expansion, discussion and review of related theoretical and applied strategies staged in other contexts. In addition, we seek to build a consensus among community, institutional and academic actors in order to produce a model of intervention in the urban edge.”

The 10-day field trip consisted of relevant site visits followed by several days of presentations by the masters program directors and students.

On the first day, students were shown Medellín’s most recent large-scale projects led by the municipality, including two Urban Integral Projects (Comuna 1 and 13) that illustrate the spatial strategies used to tackle the public intervention of strategic territories and its connection with the public transit system. On the second day, students experienced first hand social mobilization in Comuna 8, where local leaders and grassroots organizations are fighting for their right to improved living conditions, and with whom the workshop aims to explore alternative planning models for achieving their goal.

Flier for the march and proposals by Comuna 8 for the improvement of the neighborhood. photo by Creación Libertaria on flickr

”
Borders of Comuna 8 fighting for the right to live with dignity in our territories.” photo by Creación Libertaria on flickr

The remaining days were packed with insightful presentations including Clara Irazabal’s (Director Latin Lab, GSPP, Columbia University) experiences on neighborhood upgrading and  growth management and our co-directors Sandra Bestraten and Carmen Mendoza’s experiences on urban community building in Ciutat Meridiana, along with our students’ Ciutat Meridiana proposals. Meetings with the Planning and Management Council of Commune 8 were also held to analyze the historic trajectory of grassroots planning efforts in Comuna 8 and current proposals regarding the metropolitan green belt project. Community leaders presented the results of their Local Development Plan and the process of Social Construction of Habitat as basis for their territorial visions and projects. On the last day, the mixed international student groups rounded up the proposals in each of the five strategic themes prioritized by community leaders of Comuna 8. The proposals suggested diverse strategies to address the challenges and assets of the local community in Comuna 8 in order to produce an alternative model of intervention of the green belt project.

Thank you to all the university partners, scholars and students for their work, and in particular to the local community of Comuna 8 for their enthusiasm and generosity which made the workshop such a success and a productive experience for everyone involved. For more information, presentations, and photos, visit the Rethinking the Urban Fringes of Medellín blog.

For further updates on the workshop, stay tuned to our blog and our Facebook page!