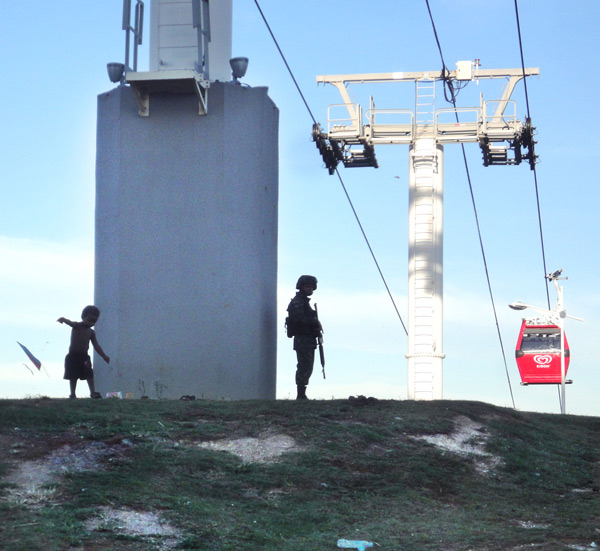 A brief account of the masters field trip to Brazil… Now it’s time for reflections.

We are on the plane ride back, only 10 hours away from Barcelona.

During the last few days, I’ve kept trying to map my mind, looking for the milestones and inspirations of our trip, but it seemed to be only a vain attempt: the frenetic speed of our tour drew me into a timeless whirl.

My head was overcrowded and my eyes were too busy to make a selection from all the inputs. We were surrounded by plenty of bright colours, graffiti, exotic rhythms, strange landscapes and wave patterns.

Brazil is currently declared the world’s sixth largest economy and Rio de Janeiro reflects all the contradictions of this rapid growth. Moreover, the city is experiencing a multitude of changes in order to host the Olympic Games in 2016. The scale of the challenges demands a multi-disciplinary approach to fulfill all the different expectations, but projects are weapons, as Jáuregui said; the favelas and their inhabitants have become an obstacle and families are finding themselves evicted from their homes to make room for new urban plans.

During our visit to the favelas, we witnessed the marginal situation in which people live and I recalled Jáuregui saying “ In Brazil there are loose cables that need to be connected” and this is the role of the architect, to make these connections.

Just a few hours away from landing, now the flashbacks of our trip became clearer. I looked back on the overall Rio Post-Flood Sports-for-Change process with Architecture for Humanity.

Thanks to the previous three-week workshop in Barcelona, we arrived in Itaipava relatively prepared: we had researched the flood disaster, built site models and elaborated group proposals to present to the local team. But the site visit and information given by the local team and architect Demetre Anastassakis had us modifying our initial plans and shaped new interesting proposals. Using our proposals as a starting point, the local team and Architecture for Humanity will continue to explore the local needs and merge them into the final project. Architecture is not an exact science and even if we had a systematic methodology, there is always a range of possible solutions that can lead to a unique and rich outcome.

For the third time, I recalled another of Jáuregui’s comments: “How can we create a situation in which people can emerge and express their desires? Desire is what starts a project and that has to be catalyzed. The project has a didactical dimension: to motivate the people to ask for more…and this is participation!”. Maybe, this would have been our next step…

For most of us this will be just a brief pit stop. Everyone is thinking about their internships as we prepare to spread out across the globe with the excitement of a new mission on the horizon.