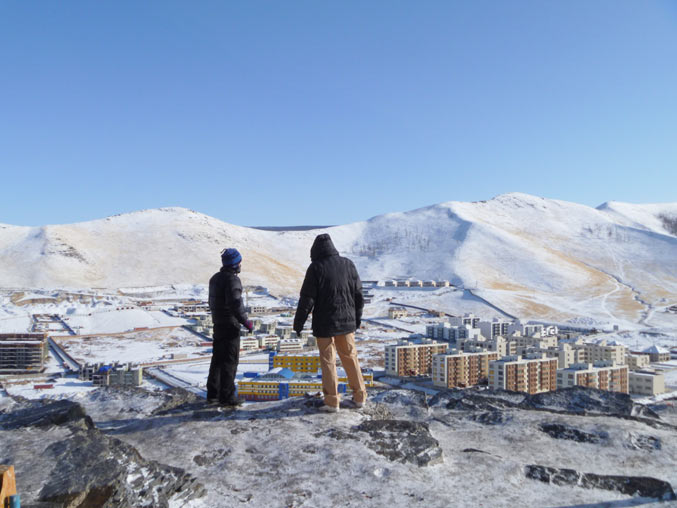 In this series, students document their experiences during the internships in 2012. Scattered across the globe, they are reporting from places like Haiti, South America, Africa, Mongolia and Japan.
————————————

Gunther Stoll, Sonam Lama, and Andrew Benham on their arrival to Ulaanbaatar, Mongolia and their internship with the United Nations Settlement Program.

While we receive only very little media coverage in the western world about the socio-economic, political and cultural upheavals currently shaking the foundations of the former great Mongol empire – following the fall of the Soviet Union in 1991, the most sparsely populated independent country in the world has turned at a remarkable speed from a communist command economy into a democratic open-market economy.

Amongst the most aid-dependent countries in the world during 1991-2002, today Mongolia is making multinational mining companies, neighboring economies and powerful actors such as China, South Korea and Russia dream of its plentiful treasures of natural resources and unexplored mining potential in their rush for copper, gold, coal, uranium and many others. In its article Booming Mongolia, The Economist magazine recently announced the country as the possible next Qatar or Brunei. The article cites that with an economic growth–driven mainly by mining gains–expected to average 14% a year between 2012 and 2016, “Mongolia will be rich beyond the wildest dreams of a population many of whom, a generation ago, saw themselves as nomadic herders.” However, in spite of the positive trends in economic growth, which mainly benefits a national oligarchy and a few international investors, poverty in Mongolia is endemic – affecting more than one third of the urban population.

View of one of Ulaanbaatar’s most recent urban development projects at the southern fringe of the city. Photo by Gunther Stoll

Cranes piercing the skyline and new architectural symbols of wealth reflecting the booming mining industry of the country, surrounding the central square of Ulaanbaatar city. Photo by Sonam Lama

Ulaanbaatar: Arrival to a Dual City

We arrive at Ulaanbaatar (UB), Mongolia’s capital and booming town on the frontline of global mining.  Sitting amidst snow covered mountains, the city spreads out along the Tuul River banks and at first sight appears delusive with its new architectural symbols of wealth contrasting the natural beauty of the surrounding scenery.

As we proceed towards the central ger districts, where we will be spending our first night with first-generation urbanities, the sense of a dual city becomes evident; one which aims to separate its inhabitants from their traditional way of life while moving forward into a new late capitalist order prompting urban injustice in an exclusive city.

Stepping out the Steppe or how to become an Urban Nomad

Increasingly harsh climatic conditions and severe freezing winters, known as “Dzuds” have made rural survival for herders, nomads and their livestock extremely difficult. The emergence of a thriving urban economy, based on the booming mining industry coupled with the government’s announcement of free distribution of land (700m2 per household) triggered a massive rural exodus towards the country’s urban centers.  Eventually this brought a slow end to a long tradition of century-old nomadic lifestyle while creating the new urban phenomenon of urban semi-nomadic culture.

Over 60% of the country’s population now live in the country’s urban centers, with more than 60% of UB’s 1.2 million inhabitants occupying unplanned and spontaneous settlements locally known as ger districts; relating to the traditional nomadic tent dwelling, the Mongolian ger.

Until the 1920s, Mongolian urban settlements were comprised mainly of ger areas and are still an integral part of Mongolian culture. However, following the collapse of the Soviet Regime and the related changes in the Mongolian economy, the country started to undergo unprecedented changes.

Central ger district of UB city with its coal steaming chimneys during the morning hours after our first night in Khishigbayar’s ger. Photo by Gunther Stoll

Due to rapid urbanization and the incapacity or unwillingness of the Municipality to deal with this unprecedented development challenge, UB’s traditional ger settlement inhabitants suffer from a lack of social inclusion and empowerment as well as basic infrastructure, high crime rates, poverty, and lack of food, water, shelter and heating. The ger inhabitants get their fresh water from central water kiosks supplied by the municipality, and cart it home in metal jugs. Given the lack of water in the districts, the people may shower at a friend’s apartment or stop by a public bathhouse. Moreover, during the winter months when night temperatures drop to -40°C, coal fired stoves in the gers cause heavy air pollution, reaching levels only second to the Iranian city of Ahwaz, posing a considerable health hazard for the entire city population.

The ger as your friend

Our host and friend Khishigbayar, a former herder, lives in one of the central ger districts with his family, consisting of his 85-year old mother, his wife and 2-year old daughter. As common practice in UB’s ger districts, Khishigbayar’s family started with the construction of a ger tent within their 700m2 spacious land plot, allocated by the municipality to each household upon official registration with the city council. Additional tents and houses have since been erected and constructed following the arrival of friends and relatives from the countryside. Enclosing the compound is a solid wooden fence, blocking every sight contact and communication with neighbors. The entrance to the ger, usually located in the south, is an extension of the actual tent – a sheet metal structure which serves the purposes of a porch and natural freezer.

Khishigbayar, his brother and daughter, replacing the external skin of the ger for everyday use with an ornamental skin for welcoming visitors during the Mongolian New Year’s Celebration on February 22nd. Photo by Gunther Stoll

According to traditional spatial patterns, the gate and the open pit toilet are found on the southern end of the compound. The self-constructed house within the compound is located on the northern side. Guarded by an aggressive and intimidating watchdog, the ger itself is a simple circular residential tent, which is easy to build and dismantle. The interior organization is flexible and responds to different procedures, such as meetings, spiritual happenings or welcoming guests.  In the interior of the ger everything revolves around the central heart of the tent, with the women’s side to the east and the men’s to the west. While the area next to the door is the place of lowest rank comprising the kitchen area and sink, the innermost important area (at the northern end of the tent) makes room for Buddhist and Shamanist symbols, family pictures or simply a TV.

Approaching the evening, according to the custom for the preparation of the upcoming lunar New Year, our host Khishigbayar starts to cut up the fattest sheep of the family’s flock.  Later on, Khishigbayar’s wife boils the lower back and tail, while Khishigbayar tries to test our sense of humor when he suddenly jumps in front of us holding the sheep’s head right next to our faces imitating monster-like sheep sounds. After having recovered from this little incident the sheep’s back is served to us on the traditional furnishings, which are painted bright orange with fanciful designs, while the family explains to us the true meaning of the ritual and the Tsagaan Sar (The Mongolian Lunar New Year) – it is a symbol for wealth and prosperity in the family.

The ideal adoption of the construction to the local climatic conditions through the use of intelligent vernacular building materials and a metal stove for burning raw coal, as well as Khishigbayar’s entertainment skills, made the ger a cozy and unforgettable night, accompanied by a number of valuable cultural lessons, upon our arrival to one of the UB ger districts.

Returning to urban planning:  The first day of our internship with the United Nations settlement program in UB begins with a guided tour through the municipality’s urban development exhibition, located on the 11th floor of a recently constructed steel and glass tower. Having in mind the traditional modes of living, local sense of place and identity, which we experienced during our first night in Khishigbayar’s ger, we follow our guide through the exhibition, struggling intensely to find a real sense behind the modern planning culture of the Municipality, prioritizing heavy infrastructure and large-scale solutions over adaptive neighborhood-level interventions and an inclusive city development approach.

Visit to the city development exhibition on the 11th floor of the municipality building. Photo by Gunther Stoll

To us it appears to be a significant misalignment between the city development vision, which tries to be free of what is traditional and rooted, and the everyday-reality of about 60% of the of the urbanites living in ger areas. Still pondering the Municipality’s intentions of the 2020 city development vision, we wonder how our agency’s citywide pro-poor ger area upgrading strategy can be sustainably integrated against global forces of rational conformity and the Municipality’s modernistic development vision on its drive towards becoming the next Dubai.

UB city development plan for 2020 is based on the pattern of the first master plan of the city introduced in 1954, influenced by the Russian city planning ideologies and by the concept of the “linear city”. Photo by Gunther Stoll

Mosaic and view of the city, taken from the Zaisan Memorial, located on a hill south of the city, which honors Soviet soldiers killed in World War II. Photo by Gunther Stoll