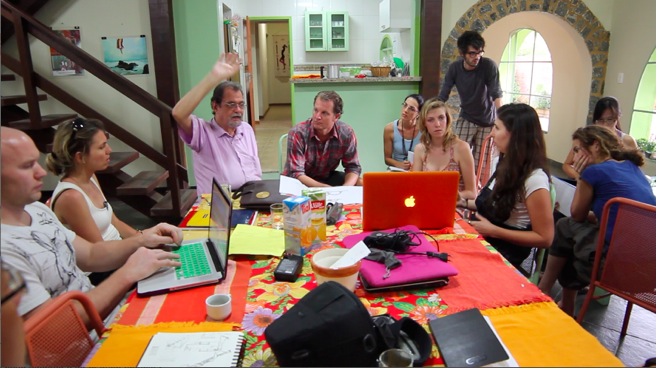 This is the student blog documenting the master’s field trip to Brazil to continue work on the Rio Floods Petropolis Sports-for-Change project in Brazil, in collaboration with Architecture for Humanity. Click here for the entire series.
————————————

Today was the last working day for us to refine our Sports-for-Change proposals and present them to the local architect Demetre Anastassakis. Fortunately, before we even powered enough to begin the day’s work, we had a small birthday celebration for a dear colleague – Elaine. A few of our thoughtful colleagues brought her a birthday cake and a stuffed giraffe, knowing that she will be heading next to Nairobi, Kenya for her internship.

Having been in Brazil for 7 days now and having met with the local architects and engineer, we understood the local building culture and the project much better than before. Since the first day we visited the site, many of our groups had drastically changed their proposals to correspond with the updated information. My group almost made a drastic change as well, but after going through painstaking discussions, at the end and on this last day, we were confident in continuing the design concept that we started off in Barcelona.

There is always a sense of guilt for me working indoors in Itaipava, as the sun is always beaming, birds chirping, insects buzzing and trees creaking in the wind. Despite the glorious life outside our windows, we were all fully focused on our work.

Mr. Demetre Anastassakis arrived at 6pm and gave each of our groups a critique. We discussed our choice of materials and the access connections of the whole site. Later, speaking to all of us, he stressed again that Brazil is a highly urbanized country, and organic materials such as bamboo are not the most appropriate in Brazil’s social context. Not that we had adopted a lot of such organic materials in our proposal, in face, our original concept is mainly steel and concrete which was what he approved of, but hearing this point being brought up again, it really pushed me to question the importance of the social norm versus sustainability in building construction.

I also realized that in my brief time in Brazil listening to discussions from different architects, the words ‘green’ or ‘low-impact’ have not been mentioned as much as we are used to hearing. I don’t have conclusive judgment on this, or with regards to this particular project as an non-resident of Petropolis, and I now regret not having asked Mr. Anastassakis his opinion of sustainable or even regenerative architecture, as that would give us an even clearer idea about the building culture of Brazil.

The architects’ visit and closing dinner

After a full day of design development, Demetre Anastassakis, architect of the housing project below our site, gave us a visit in order to share his perspective about the proposals. With the group presentations underway, the pleasant smell of our next meal signalled our last dinner in Brazil and reminded us that the first part of the master’s course was coming to an end.

After discussing the projects, it was time to get to know the architect’s personal work. With Ana as translator, he presented a selection of projects from the late 80’s to the present. Anastassakis focused the discussion in the real-time practice in Brasil and how bureaucracy and political issues can affect the project in many ways. He proceeded to give us several examples, including one in which the project related to the Sports-for-Change proposal in its dealing with private and public investment, a situation that complicates the way they select the beneficiaries and how they proceed in the construction of the project.

Demetre’s works have a social input that can be appreciated in the built formal design. Among the projects that left an impression was one that the government is at present not willing to repeat. The radical proposal seems to have no logical order and apparently follows the tradition of Brazilian informal settlements. However, the density is controlled on each level: the first almost fully occupied and successively less in upper levels. The government complained that the police would not have enough control of the inhabitants and criminality because of the design, but the architect believes it is not his job to trap criminals but to improve the life of the community.

Left: The Government is not willing to repeat the project because of the lack of institutional control in the complex. Right: Drilled ceramic blocks – patented material of the architect, the technique provides a lighter and cheaper block with the same strength as traditional ones.

These past 4 months have been a more than appropriate platform to delve into the speed and logistics of International Cooperation. From October to January we had 8 courses in which we improved our capacity for working in groups and presenting our ideas in fast and efficient ways. The master’s group consists of a fusion of professionals, from countries all over the world, and the process by which the multiple experiences and perspectives came together in unique ways never ceased to impress.

At the end of our last full day in Brasil we gathered around the big table for dinner. The group’s feelings started to fill the environment, and we all knew it wouldn’t be the same after it ended. In a few days, we would be scattered across many countries around the world, but that table signified the link we had come to build. With food and friends, it was time for a toast. Nathaniel Corum, course professor, took the initiative and expressed his fulfillment about the performance and dynamics of the group. The toast brought up the haunting question: Why do you love architecture? – directed at the two people who shared a birthday during our trip to Brasil. Tommaso and I were put on the spot, and with the benefit of retrospect I can now answer the question that, at the time, lingered over us as we searched for the right words to say. I love architecture because it gives me the possibility to do something positive in this world that changes so quickly and not always in the best direction.