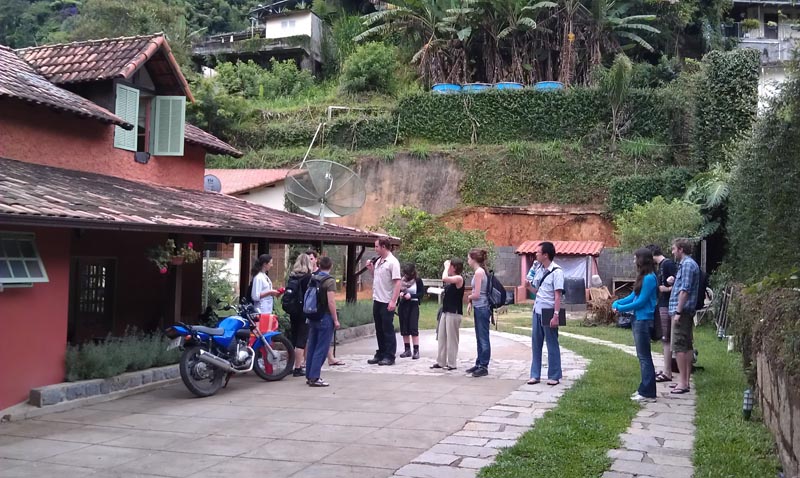 This is the student blog documenting the master’s field trip to Brazil to continue work on the Rio Floods Petropolis Sports-for-Change project in Brazil, in collaboration with Architecture for Humanity. Click here for the entire series.
————————————

Second day in Itaipava, the day began with beautiful sunlight and a soft breeze carrying fresh tropical air through the hostel, as if coaxing us to wake up. After a brave struggle against pillows and blankets, our group set off to the beautiful Hotel Vale Real. There we were introduced to the architects and several representatives of the local residents, donators, and work groups that have been working on the Petropolis housing project (rebuilding homes for January 2011 flood victims) with the local leaders and government for months now.

At the meeting, we were given important details about the present situation of the project, and learned about the organization that leads the housing project: the Children’s Institute. The institute serves as a Social Entrepreneurship Platform, connecting all sorts of needs, help, and donations and aimed at supporting social projects in a sustainable manner. They want the Petropolis project to serve as an example for other upcoming or potential sustainable reconstruction plans.

“We used to simply divide the donated land into similar pieces and build the same houses on them; this time we want to do it in a creative way,” said the representative of FRIJAN – Federation of Industries of the State of Rio de Janeiro.

One important thing, which I believe is crucial to all our projects, was also mentioned: the profile of the family members here is quite different from anywhere else in Brazil: Families have fewer children and people older than 50 constitute the majority of the population. This new piece of data, in addition to the following site visit changed my thoughts about our project entirely.

Only a few minutes by bus and we were visiting the site, which has always been my favorite part of any  project. It is the place where dreams takes shape and become reality. Like Mr. Jorge Mario Jáuregui mentioned in the first day of the field trip: Architects must understand their working sites as well as possible, so that they could hopefully make the right choice, and transform this shitty world!

The steepness of the slope had us climbing into two trucks in order to reach the hillside, at which moment the word “accessibility” sprung to our minds. The first thing I noticed in the construction site of the housing project was the material being used. Coming from an island where earthquakes of every scale happen at least twice a year, it was surprising to see that such a thin reinforced bar an could be used in the main structure of a house.

And then, the abundant nature I was observing all around me kicked our initial proposal’s football court out of my head as easily as blowing a feather into the air. Do we always have to do something? There is already a court nearby and football does not sound like a great choice of sport for people over 50. Do we even need the mini-basketball court? If we don’t, what sport should we choose? Maybe it does not have to be a sport anyway? Will we kill things off when we decide to level the hilltop with reinforced concrete? The hornbills that just flew out of my sight? The edible herbs? Or the sense of sustainability? One question after another bounced through my head as we made our way to lunch.

For lunch, the group took a short walk into downtown Petropolis. Since the very first day we set foot in the country, every single Brazilian that we met asked the same question: Seriously? Are you sure you are leaving Brazil right before the carnival? “It’s a sin,” one of them said.

As we walked through town in search for a place to eat, we noticed that Petropolis was also preparing itself for the carnival. Now it is getting harder and harder to tell myself that we are only here for work.