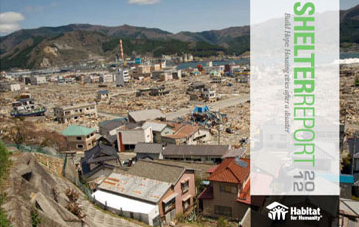 By adminOctober 4, 2011Blog, NewsBites
No Comments

The nonprofit housing organization Habitat for Humanity International has just released its “Shelter Report 2012 – Build Hope: Housing Cities after a Disaster,” which highlights the urgent need for safer urban housing conditions to improve resilience and recovery after disasters.

“Natural disasters are a fact of life. In recent years, earthquakes have shaken Japan, China, Indonesia and Haiti; flooding has swamped Pakistan and the Mississippi Delta; hurricanes have tested New Orleans and the U.S. Gulf Coast; and tornadoes have ripped through Alabama and Arkansas. Over the past five years, more than 13 million people have lost their home to a natural disaster.”

From Reuters AlertNet:
“The Shelter Report details the importance of planning for long-term recovery as a part of disaster response, particularly in urban and developing areas with large populations that have grown rapidly. According to the report, the number of urban residents worldwide living in areas vulnerable to earthquakes and cyclones will grow from 680 million people in 2000 to 1.5 billion people by 2050. In many of these areas, infrastructure cannot keep up with population growth, leaving families with little or no access to adequate shelter, healthcare or basic human services in the wake of disasters.”

From land tenure issues to employing local residents for reconstructio, the report sites specific cases like Haiti and outlines how planning for permanence during rebuilding creates a more solid path to recovery for residents, families and entire communities.

You can download the report at Habitat for Humanity and also register for the webcast of the event Rebuilding a City:  The Dos and Don’ts in Post-Disaster Urban Recovery, at Brookings Institution in Washington, D.C., where the organization will officially present the report on October 6th. Update: Watch it here.